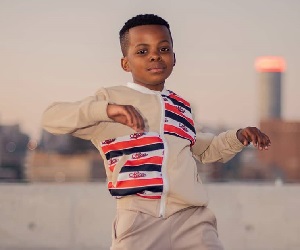 He has captured the mind of many music lovers with his dance moves.

His voice adds to the tally as he never ceases to impress listeners and fans.

Retha entered the music industry in a ‘pretty dramatic’ way, still, he has managed to gain popularity and entertaining fans.

Though many listeners and fans know him by his stage name, His real name is Rethabile Mokgatla.

Retha RSA is a contraction of his birth name while RSA stands for the ‘Republic of South Africa’.

His date of birth is on the 13th of April 2011 and the place of birth is in Lesotho. Retha RSA is 9 years old.

For a boy his age, he has recorded many achievements. He falls on the list of kid influencers in the country.

The youngster has drawn the attention of many to him through his unique dance moves.

His voice surprised South African viewers with his voice. Retha has dropped an album ‘Tom and Jerry’.

He has also collaborated with amapiano heavyweights in the country

Retha RSA’s phone number is at the moment out of the public’s reach.

At the moment, he has not shared his phone number with the public.

Several celebrities rather keep their phone number from the public, most times it is for security reasons.

He is also active on social media including on Instagram and YouTube. Fans and followers can consider reaching him through the later mentioned platforms.

He is a South African, though he was born in Lesotho. They relocated to his country of origin soon after. Retha’s place of residence is in Soweto.

Retha lately shared a picture of him and his tutor. He shared with followers that education is of a higher value to him than his music and his entertainment career in his caption.

“If you think am not in school or I’m not going back “in your mind”.

“Education to me, is more important than my music and entertainment career. So nje relex!! siiiii laaa education + Retha rsa siii sooo”.