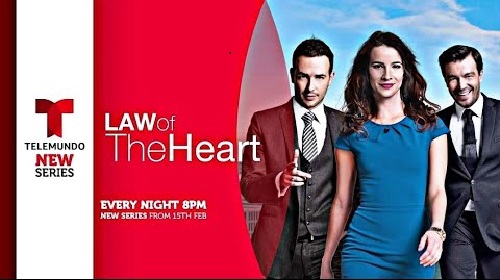 The premiere episodes of the popular show on Telemundo Law of the Heart in March 2021. Julia is stuck in the decision, she can’t conclude who to be with, Camilo or Pablo. Who will grab the keys to her fragile heart?

Milena received a lawsuit filed by Elias for violation of privacy and manipulation, she was found guilty by the court. Nicholas is convinced that homicide was the cause of the death of Santiago, it wasn’t an accident.

Law of the Heart teasers this March 2021

The teasers of the series, Law of the Heart houses all you should expect on the show. The popular soap opera, Law of the Heart, airs on Telemundo daily at 9 PM. Upon seeing a recording of Elias with Milena, Isabel couldn’t help but wants a divorce.

Jimena and Rosa team up against Julia as they try to get her away from Pablo and the law firm. A recording of Milena and Elias together gets to Isabel. What move do you think she’ll make?

Isabel wants and asks Maria del Pilar to stand as her lawyer as she calls her marriage with Elias a quit. Julia was asked to dinner; nervously she turns down the invitation by Pablo.

Maria del Pilar suggests to Elias that it would be best that Julia should represent Isabel in the divorce case. Why did he exempt himself? Luz gets to know of Mariela’s plans to end the pregnancy after she shares it. Will Luz give her a go-ahead?

Upon getting hold of the evidence incriminating his wife who wanted to poison him, Pascal takes it to Pablo. What will be the next move? Irresponsible behavior portrayed by Alejandro came with consequences.

Pablo accepts after Manela asks him out, while the jealous eyes of Julia were watching them. Later, Mariela who is in the hospital gets a visitor – Catalina.

Alfredo receives a help request from Catalina with Mariela’s case. Will Alfredo offer help? Meanwhile, Elvira emerges winner of the lottery. Later, Nicolas reveals to Duperly that the lies being told by Camilo are suspicious.

Milena was dragged to court by Elias for violating his privacy and also for manipulation. Meanwhile, the divorce status of Pablo comes to the knowledge of Julia who then regrets no accepting him.

Rosa welcomes Julia to her new office without revealing she was jealous. Meanwhile, Gustavo receives a jail sentence after being found guilty of murdering Victoria.

Julia takes her resignation later to Pablo, he did not accept it rather tears the document apart. Will she remain in the place of work? Maria Cristina decides to push fear aside and face her problems.

Alberto shares with Pablo the pressure he is facing by his family to separate from Carolina. Upon emerging the winner of her case, Mariela was grateful to Alberto for help.

After remembering everything that took place at Alejandro’s house Nicholas concluded that Santiago’s death was not an accident. Pablo receives an apology from Julia, will he accept?

Nicolas blames Alejandro for feeding him with lies and making use of him to cover the tracks pointing to the crime. Mariela is hit by Mauro, who is drunk, after knowing that she has ended the pregnancy. What will happen next?

Rogelio summons courage and decides to walk himself to the authorities and turn himself in. Meanwhile, the court finds Milena guilty of invasion of privacy and slander, a date has been scheduled for her sentence to be heard.

Julia and Pablo share their first intimate moment with a kiss. Later, Elias and Nicolas visit the hotel where Patricia was murdered in search of evidence. Will they be successful?

The details on a judge who is an expert in intentional homicide were given to Nicolas by Aurora. Aurora further advises Nicolas to search for any incriminating evidence that can be used against Alejandro.

Carmen now knows that Pablo went on a date with Julia after Pablo tells him. Meanwhile, Nicholas is doing all he could to make Laura believe that Santiago’s death was not an accident but murder.

After Irman shares her intention to file for a divorce, Elias advises her as a professional. Meanwhile, Marcos receives a Job offer at the firm from Nicolas.

Pablo and Julia discuss the release of Camilo from jail. Later, Alfredo with Marcos planning on finding the woman who has a hand in the death of Camacho.

Pablo and Julia spend the night at his apartment. Meanwhile, Leonardo steals from Catalina after tying her up. Later, she is found by Alfredo who offers to support her.

Catalina who is still worried shares her robbery incident with her colleagues at the firm. A court hearing takes place on the domestic violence case for Eduardo and Angelica.

Finally, Camilo welcomes freedom and hosts a celebration at home. At the funeral home, a serious argument between Pablo and the son of Alberto, who did not buy the idea of cremating the body of his father.

Roberto shares his suspicion of a possible affair going on between Pablo and Julia with Camilo. Eloisa is arrested in connection with Camacho’s murder case.

Julia makes Alvaro and Miguel aware of her confusion about the choice between Pablo and Camilo. Later, Samuel asks Astrid to go on a date with him. Will she say yes?

Following a sad event at the nursing home, Nicholas tries all within his power to comfort his father. Pablo rejects Jimena who begged him to grant her a second chance.

To win Julia’s love, Camilo is determined to go the extra mile. Nicolas was confused after Catalina asks him to be the person to donate sperm.

When Manuel flirts with Pablo, Julia was filled with envy. Salvador and Ricardo break the sad news of Salvador’s cancer to Ivan. What will be Ivan’s reaction to the confession?

Encinales and Viviana receive a warning from Pablo to avoid Orlando who is an abuser. Not finding a person to donate sperm gets Catalina unhappy and disappointed.

While arguing in the boardroom, Dario and Manuel caused a commotion. Meanwhile, upon an interrogated by Camilo, Eloisa pleads guilty to the death of Camacho.

Camilo requests permission from Hernando to permit Julia to work on the case of Eloisa with him. Hernando agrees under one condition that he must also work with Pablo.

Catalina tells Pilar that she is suffering from paranoia and anxiety attacks. Jimena keeps up with too much drinking and abandoning her responsibility to her children.

An argument session holds on the phone between Jimena and Pablo. Leonardo gets tricked by Maria del Pilar who then confronts him for being the person behind Catalina’s robbery.