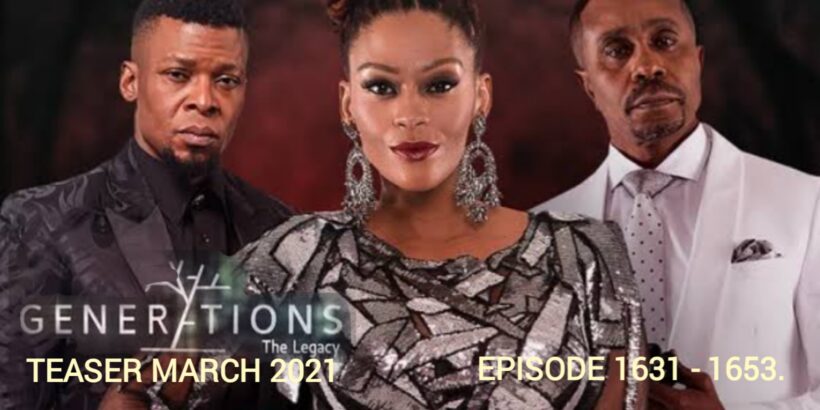 The Fergusons have set the entertainment industry with hot episodes from the series, Generations: The Legacy. The teaser for March episodes contains shocking moments. Finally, everyone’s jaw is drawn down following Mazwi’s actions.

Tracy did not allow being snubbed to interfere with what she was doing, rather, she perseveres and proves her worth. Kabisi wakes up from a coma to hear what he is not happy about. The Minister is ready to do all it takes to know the person who set him up.

Coming up this March 2021 on Generations.

Any consequence that follows his action, Siyanda vows to accept them. Tshidi receives the fate she deserves for a change. Meanwhile, in the police station, a hostage drama unfolds.

An unexpected houseguest pays Zondiwe a visit. The suggestion made by Moroka’s heir thrills Kabisi but will his partner have the same feeling? Tracy snubbed but refuses to quit.

The good mood Mazwi exhibits at his celebration party come to an immediate end. Ayanda lets the cat out of the bag, she was to keep the secret to herself. A lair gets caught up in his lies.

Nontle becomes restless upon hearing a conversation. Tshidi sets up plans to play with her spouse, will it work? A few surprising incidents happen to Jack today.

Gadaffi mind housing an unbelievable proposal. How possible to find a thing without the knowledge of what you are searching for. Noises made in the night interrupts Zondiwe from sleeping.

Who knows? Mazwi may be in for a rude shock after thinking his CEO has conceded defeat. Kabisi’s mother-in-law’s strange behaviors are still not understandable to him. Siyanda is not ready to allow his big brother to show him disrespect.

After receiving a call on the phone, Tshidi tries to stay calm hiding the effect it has on her. Meanwhile, Mpho takes the wrong decision in a situation. Little did Bruno know that what he is saying is being recorded.

After regaining consciousness and waking up from his coma, Kogosi receives news that surprises him. Pele makes a wrong arrest on the wrong people for what they are not guilty of at the wrong time. A stalker to try to the best effort not to be spotted by whom he/she is following.

The perfect solution to the issues of Gadaffi may be in the hands of Luke. Meanwhile, if Jack does not care to listen to reason, Sphe option B will be to go to another person. After being persuaded, Cosmo does something he does not feel like doing.

Tshidi can not say if she will be able to withstand temptation. Siyanda kicks off action immediately after receiving the call he has long for. Moroka’s house is visited by Nkaba who is prepared for war.

Bad news comes to the knowledge of Mazwi but she seemed to care less about it, is that pretense? Mrekza is pretending to be copying but in the real sense, he is not. Ayanda overhears what should not come to her hearing.

Meanwhile, the Minister’s determination waxes stronger to know the person behind the setup. Why would a person intentionally cause themselves to suffer a cardiac arrest? Sharma arrivals mark the end of the celebratory vibe.

Mabaso’s house receives bad news, Shock and horror followed. On the other hand, Lesedi to do all it takes until the Diales are proven to be wrong. That moment two ex-lovers exchanges goodbye for good is bittersweet.

After hearing the shocking news, Ayanda wants to know only the truth. Will the person Mazwi sees as a friend be betrayed by him? Luck smiles on miserable Mbali, Nontle has a plan.

Ayanda demands the truth and is shocked by what she hears. Will Mazwi betray the man he’s come to see as a friend? Mbali’s miserable but luckily Nontle has a plan.

At the shebeen, it comes to Cosmo’s realization that all is not okay. The answers to a worrying mystery could be in the information Tracy has. While upset Mrekza decides on an irrational decision without knowing there are ears nearby.

Anger takes over Mpho who spills the beans. Must you see to believe that “Fikile the shebeen queen?”. A bad feeling on the matter arises after Sphe walks in on a conversation.

The outcome of her poison, just as she wanted, gets Tshidi delighted. Jack doesn’t know or like to be desperate. Mazwi’s new behavior stuns everyone.

To take on the board, a game plan will help Siyanda. Upon getting a call on the phone, Mrekza receives bad news. The situation has changed on Jozi’s most notorious gangster.

Finally, revenge strikes in favor of the Russian mobster and is enjoying every minute that comes with it. The pressure is on Kgosi from all sides. On the other hand, the suspicion of the incident in the clinic continues to increase for Sphe.

After blowing her chances to success, Tshindi only realizes when it’s too late after doing too much. Meanwhile, Mazwi’s friend’s bad mood turns into an opportunity for him. What should be your reaction when the husband of your best friend comes onto you.

Pele is trying all seemingly possible to gets his man, how will that turn out? Siyanda gets pushed a little beyond the limit, what will be the next action? Cosmo gets the answers he seeks but found out it is not what he feels like hearing.

A heated argument breaks out between the brothers-in-law without knowing there are ears nearby. Tracy proving to be useful, is she? The offer Kgosi made leaves Lev Fascinated.

Lesedi is unable to understand the reason Tshidi wanted to see her. The Queen of Alex is still alive. Jack seeks help from a man he deems trustworthy.