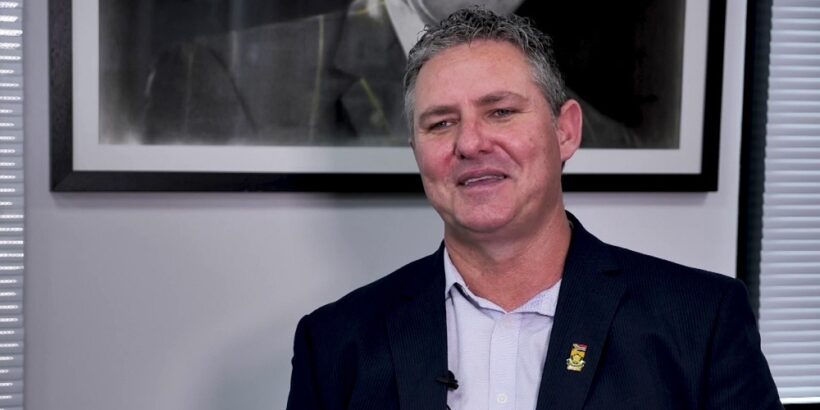 Jacques Faul (born and raised in Klerksdorp) is a legendary South African tactician. He is popular for being involved in cricket affairs in the country.

His outstanding performance on the pitch and qualifications earned him the experience he boasts of today as a coach. Today, Jacques is one of the most celebrated and respected managers in Mzansi.

He boasts of over fifteen years of experience as a CEO in professional sports administration. Jacques has also been a consultant in stakeholder relationship management.

Currently, he sits as the CEO of Titans Cricket and Northerns Cricket Union and is the longest-serving. He occupied the position of Cricket South Africa CEO after Mr. Thabang Moroe was suspended.

The renowned sports personality is married to the love of his life Mrs. Elvira Faul. Jacques rather focuses the attention of his fans and supporters on his profession. He maintains secrecy in his private and personal life.

Though he hasn’t said anything about his children either. But he shared a picture containing him, his wife, and a young boy that seems like his child.

Even he is a renowned sports expert, he has an academic background. He had his academic pursuit at the North-West University/Noordwes-Universiteit. He graduated with an Economics Management science Ph.D. (2013-2018).

For a year, 2007 until 2008, he attended the University of Witwatersrand. At Wits University, Jacques studied Executive sports management.

He has gained experience as a sportsperson and is leaving a notable mark in the sports industry.

He was the Chief Executive Officer at Titans Cricket and Northerns Cricket Union. For a year, he filled the position of acting CEO at Cricket South Africa (2012-2013).

Jacques served as the General Manager at the Lions Cricket for 8 years. While occupying the post, he made a request to step in as the CEO of the organization.

For almost a decade, 9 years, he served as the Chief Executive Officer of the North West Cricket.

After the CSA Chief executive officer, Mr. Thabang Moroe was suspended. He was appointed to fill the position as the acting Chief Executive Officer in December 2019.

His profession in cricket dates back to his young days. Jacques notably performed well during his days as a player representing Northwest.

The renowned sports personality represented Northwest at both the junior and senior levels for almost ten years.

His performance, talents, influential personality, and success recorded earned him a seat on the Northwest Cricket Board. He won a sit on the board in his twenties.

Jacques receives credits his being the CEO of Northwest Cricket Union to his ability to find solutions quickly and with a with the approach.

When he was thirty-five, he was considered the best person to fill the position to head the union. He defeated other competitors/opponents who were relatively older and experienced.

His managerial acumen was evident at the Titans as they turned indomitable and defeated any team on the domestic front. His impressive management skills produced lots of trophies and notable national awards.