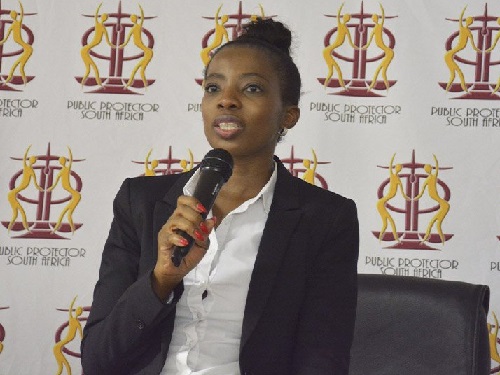 Kholeka Gcaleka (born in 1982 in KwaZulu-Nata) is an advocate of the high court of South Africa. She was announced to serve as the deputy public protector by Parliament’s justice portfolio committee in November 2019.

She is not a newbie in the country’s legal matters and has appeared in several high-profile cases. Together with her qualifications, that earned her the appointment to her new position.

She was born in 1982 and the place of birth is in Johannesburg, South Africa. She grew up between the city of gold and Umzimkhulu, a town in Harry Gwala District Municipality, KwaZulu-Natal, South Africa.

In an interview session with Power987, she revealed that her upbringing played a notable role in her value system.

She grew up in a white family, her mother was a domestic worker. Kholeka says that growing up and returning to the rural areas made her experience “widespread inequality and poverty”.

She has served as a special advisor and senior state advocate and occupied the position of deputy director of public prosecutions.

Kholeka is an Admitted Advocate of the High Court of South Africa and the former national chairperson of the SA’s Society of State Advocates.

She is a member of the Black Lawyers Association and is Director at Khonconsulting to date. She was an advisor to Malusi Gigaba during his tenure as the minister of home affairs and finance.

She boasts of over fourteen years of experience, with eight years of senior management experience.

She was appointed to serve as deputy public protector from eight candidates. This follows an exhausting selection process in the Parliament.

She was nominated for the post by Advocate Adele Barnard. Gcaleka earned the position with her vast experience in the government through several positions she had served.

The department of justice and correctional services requested for the National Assembly’s approval on a salary adjustment for the deputy public protector.

According to John Jeffery, a deputy minister, Kholeka Gcaleka received lesser pay than her predecessor.

“The current salary of the DPP sees her earning considerably less than the executive management of the institution over which she shares oversight, thus undermining her authority to fulfil her responsibilities,” he said.