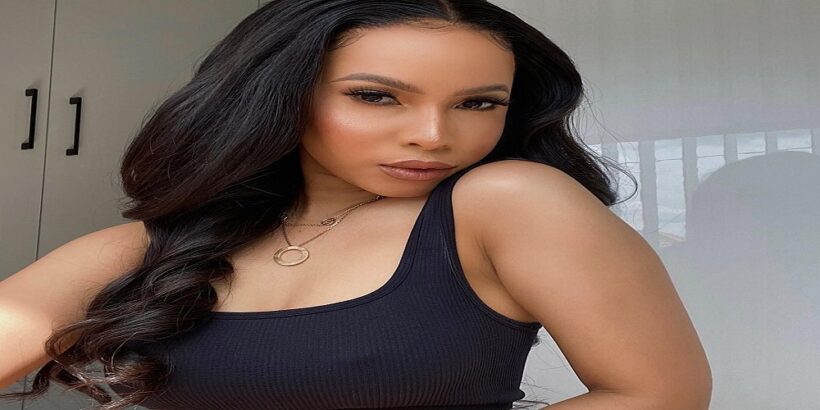 Thuli Phongolo is one of the female celebrities in South Africa nature smiled on with the curvy body. She never slacks to flaunt her hot curves and even has allowed followers to take a peek. Are you doubting?

She was born on 22 January 1994 and trust me when I say the actress knows that she is hot! The 27-year-old appeared first on the screen after she cast as Zama on Tshisa, a SABC television series.

On her social media account, the disk jockey leaves mouth-watering pictures of her hot body. She the favorite local soap opera, Thuli appears as an innocent girl but on social media, she decided to be a bad-ass. The street of IG has not yet recovered from waves she made lately with half-nude pics she shared.

The actress doesn’t hold back from flaunting her hot body, what is the use of a curvy “figure eight shape” if it stays hidden?

There is no better way to start the day rather with a picture of a hot beauty in bed. On 31 December 2019, Thuli shared a picture that burst the mind of many. In the picture, she laid in bed holding perfume. Who else can beat a body like hers?

On Valentine’s day in 2020, she left many focused on her pictures rather than that of their lovers. She dropped a picture that got people talking on Valentine’s day. Coupled with her looks, Thuli has a body that would get people to look twice.

When everyone thought they’ve had it all, she appears even hotter. On 25 March 2020, she broke the social media and the internet at large another photo of her body. She made waves after appearing in lingerie. Wait a sec, is that human skin? The smoothness of her skin made the actress so hot and drew more attention.

On 26 February 2021, she left many as they find the right word to describe her look. She dropped a picture that made many lose their mind, that happens almost every time she drops a snap. She wore an oversized shirt rising the lower end to give followers a peek. The eyeglass, lipstick, and the way she styled her hair made notable contributions to her looks.

On 28 September 2020, Thuli once again set the internet ablaze with another hot picture of her. She used the picture to express how thankful she was to reach 2 million followers on her verified account. She is too hot that you may want to “ass-cuse” her.

On 20 October 2020, she made waves on the internet after putting dressed in what appears to be swimmers. Though she was in a room, the dress with a python skin design left much talking, who wouldn’t. The pose she made coupled with her eyeglass and hair added to the hotness.

It seems that anybody pose she takes only results reflects how hot she is. She left many fans and followers talking after sharing a close picture of boobies on her account. On September 25, 2020, Thuli set the internet ablaze with her pictures. Though the picture was not revealing, being close to the camera and also her cute eyes with the brown lips stick is enough to make internet users go wild.

Want to Submit Your Biography?