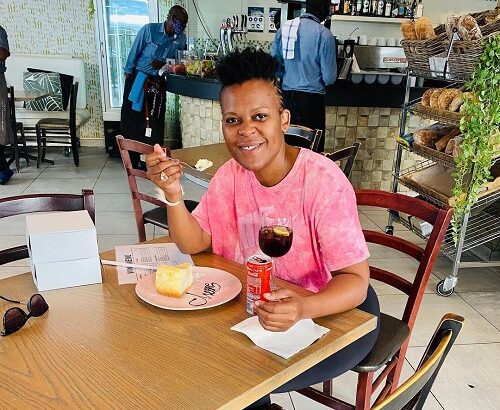 Zodwa Wabantu (born Zodwa Rebecca Libram; 30 October 1985 in Soweto) is a South African media personality, socialite, and dancer. She is popular in the country for her dance moves which she adds a touch of ‘body revealing moves’.

She worked for a debt collection company but the passion she has for entertainment drew her to the industry. Many both young and old seem to like her talents and most of her dance videos receive positive feedback.

The dancer was appreciated for her amazing dance moves at Eyadini Lounge at Durban. For Zodwa, dance comes easy as any move she makes creates a nice combination of dance.

As a dancer, she is not a newbie in the entertainment industry, she has danced for several musicians in the country. Zodwa is best associated with Mthokozi Khathi (DJ Tira).

The dancer’s date of birth is on 30 October 1985 and the place of birth is in Soweto, a township of the City of Johannesburg, Gauteng. Zodwa Wabantu is 35 years old. She throws a party in remembrance of her birthday every year on October 30th.

She grew up in Soweto under the protective care of her grandmother and aunt, she was orphaned at a tender age. Zodwa did not know who her dad was.

Life has not always been a bed of roses for Zodwa, she stepped out and had to survive on the goodwill of strangers. She is a proud mother of a male child, Vuyo, who she welcomed into her family in 2006.

Zodwa before becoming famous was a debt collector and today she has managed to enter the entertainment industry with a unique style. She made headlines for her “nearly naked looks and liberal viewpoints” and also is popular for dancing in the local nightlife and club party scene.

In 2017, the Soweto-born dancer triggered reactions after she wore a black dress with a slit that revealed half of her bottom. She wore this stylish dress to the Durban July.

This alone drew the attention of thousands to her as they waited in anticipation of her next move.

Speaking to TshisaLIVE, the proud mother spoke about exchanging money from men for sex. Though many would say it is “prostitutions” the dancer saw it as “hustling”. Zodwa though insisted that no child should undergo what she did.

She began to make waves in the country, it did not take long DJ Tira, an Afrotainment heavyweight started to book for her appearances.

The Tourism Authority mentioned that Chiefs and Traditional leaders present would be offended if her private parts were not covered up.

Anne Nhira, a popular actress in Zimbabwe, complained that a local performance could have been booked to perform at the festival instead of Zodwa.

The Zimbabwean actress further complained about “Zodwa’s provocative style” and reports covered that the actress referred her to a lesbian.

Finally, Zodwa was banned from the festival following Anne’s grievances.

Zodwa was dating Ntobeko Linda. The couple decided to take their relationship to another level in 2019. She proposed to her boyfriend who was twenty-four years old and presented him with a rose gold ring worth R5 217.

The dancer also bought herself an engagement ring which cost R47 826. Zodwa’s engagement ring was a custom made rose gold morganite and diamond ring. The couple dated for six years but unfortunately, they did not get to exchange their marital vows.

She called off their engagement in June, this will make it the second time this time it is for good!

The Local entertainer is a self-proclaimed “pantyless dancer”, her dance moves have gained her love from many fans. Her vosho moves have made her a “star attraction” at several clubs in South Africa.

In 207, she was banned from a Zimbabwean carnival after complaints got to the officials that she would “tarnish” the image of the country.

The Local entertainer wanted to receive at least half of her lobola money back since calling off her wedding. She told Drum that she needed to discuss a way forward with her ex-fiancé.

Zodwa’s mind is made up and the wedding is over.

She reveals that the Ntobeko’s family would return at least half of the lobola money. And for the wedding gown, she planned on wearing it on the last episode of Zodwa Wabantu Uncensored.