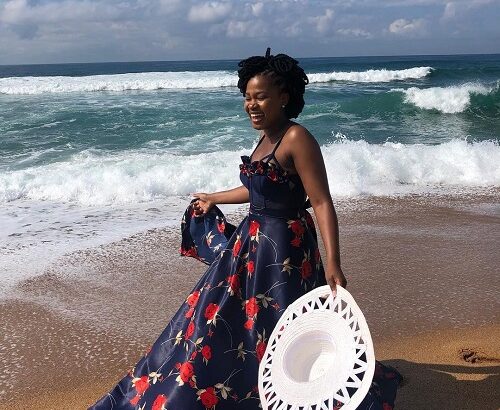 She is known to many television viewers for featuring on Generations as Noluntu Memela.

The dreadlocks she wears in several styles have also made many fall in love with the actress.

Her date of birth is on the 11th of October 1985 and the place of birth is in Kagiso, Krugersdorp, South Africa.

Zenande Mfenyana is 35 years old. She celebrates her birthday every year on October 11th.

The name of Zenande’s sister is Akhe Mfenyana, she is also a South African actress.

She has her matric at Queenstown Girls’ High School, she furthered her academic pursuit at the Tshwane University of Technology. She graduated from a higher institution with a BA in Drama.

When she was a newbie in the industry, she made a reveal that she sought ways to survive.

She walked into the spotlight after she made an appearance on Generations, a South African soapie. She played the role of Noluntu Memela.

The character, she defines, came from a wealthy family and is rude and seeks attention. She finds it interesting to step on people’s toes.

In the early months of 2015, she landed a starring role as Reba on Ashes to Ashes, an e.tv soapie.

Later, she made it as a cast on South African favorite show, The Queen.

Eventually, she played the role of Mabel in the movie ‘All About Love (2017)’.

The same year, she played the role of Grace in the film Kampterrein.

Two years later, in 2019, Zenande landed a starring role as Cynthia Vilakazi in the movie Shuga.

She also made appearances in the first and second seasons of the show Igazi. Zenande portrayed the role of Babalwa.

Zenande appears on television wearing several different hairstyles. She has proven that dreadlocks have a unique style and made many people fall in love with them.

The actress confirmed that she has given birth to her bundle of joy. This followed months of speculation she left her fans on reading when they asked her about when the baby was due.

She took to social media to share with followers her experience as a parent.

“I didn’t know I was ambidextrous till I had my daughter… I also didn’t know that I can do soooo many things with one hand, and don’t get me started on being fully functional on such little sleep. Amazing. Being a mother is magical.” she wrote.

She was on the Panties & Bra Campaign, a movement that identified the need to shine a spotlight on less privileged girls, in 2018.

In 2014, Zenande was signed as the brand ambassador for an online store for hair products, clothes, and accessories, Chelline.

After two years, she became the brand ambassador for Geisha.