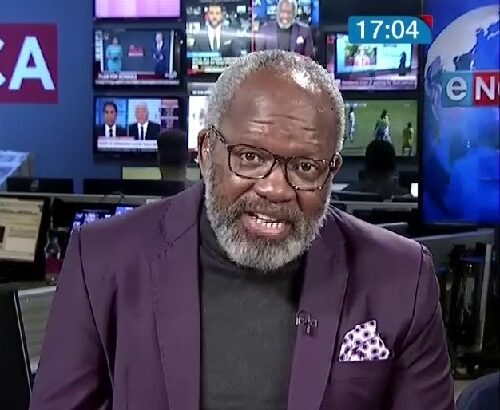 Vuyo Mvoko (born on 21st February) is a renowned South African Journalist, TV anchor, and presenter. He boasts of working with several media firms in the country.

At the moment, he works with eNCA as a political editor. He worked as a contributing editor with national network SABC

He is also an ‘Associate Editor’ for Forbes African Magazine and is also a chairperson of BAY TV, a community TV station.

He is married to Sina Mvoko, the love of his life. According to Latest News South Africa, their wedding was held on the 8th of June.

The senior political anchor and journalist, Vuyo Mvoko, was on the 14th of September, 2016 suspended during his stay with SABC.

His suspension followed after he wrote an article for The Star, criticizing censorship and bullying culture that he believes is prevalent at the SABC.

In March 2015, popular South African journalist Vuyo Mvoko was mugged on camera as he waited to go on air.

A video containing two (2) men accosting the journalist as he waited to cover a report of the arrival of Zambia’s president for a medical test at a Johannesburg hospital.

According to him, he was threatened by one of the muggers when he refused to release his mobile phone.

The muggers seem not concerned by the presence of the camera as they robbed him.

According to BBC, two (2) men have been arrested for robbing the Journalist on camera.

“We’ve just positively identified our phones among several other stolen goods,” He tweeted.

Two (2) other suspects have also been arrested for purchasing stolen goods including laptops that belong to SABC TV.

The four (4) suspects were to appear in court, Vuyo said that a suspect was on the run. The Police had offered an R100,000 reward for information that leads to their arrests.