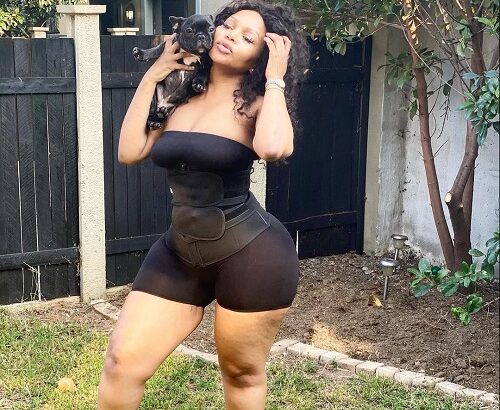 Tebogo Thobejane (born in Johannesburg) is a South African slay queen, social media personality, and entrepreneur. She has gained popularity on social media by posting revealing pictures of herself. She boasts of over 353k followers on Instagram.

In 2020, the national lockdown affected her other streams of income which made her venture into Onlyfans business.

The popular Mzansi slay queen is 38 years old. The proud mother says that people get shocked anytime she shares her age. At thirty-six people thought she should be ‘washed out’ by now like others labeled as slay queens.

Tebogo is a film graduate from the School for the Creative Economy, AFDA. She got training as a producer, not necessarily an actress.

She is the daughter of late Obed Thobejane, who was the co-founder of an iconic South African hair brand. Tebogo probably got her entrepreneurial spirit from her late dad.

Tebogo is a proud mother of a son named Botlhale.

Her profession started as making appearances at night clubs but has grown into a role on Muvhango.

She has made it as a cast on the popular Mzansi drama series and many are wagging their tongues wagging. Tebogo Thobejane who plays the role of Belinda, a wedding planner, on the soap opera is not a newbie on the media.

She became known to the public first as bestie of Faith Nketsi who is also her mentor and business partner. Tebogo is a co-founder of Feline Model Management with her bestie, Faith.

Tebogo continued the management business before trying out other businesses.

She ventured into the Onlyfans business in 2020 after her other ‘streams of incomes’ were affected.

A few weeks into the business, she made it to the “top-earning percentile of the website”. She made an estimated amount of over US$7,000 (R106,000) each month.