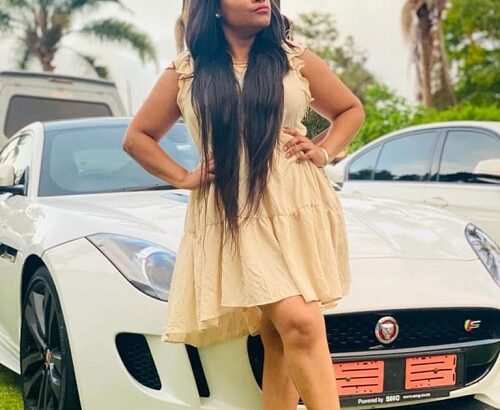 Sthandwa Nzuza (born 9 February 1984 in Inanda, KwaZulu-Natal) is a South African radio personality and actress. She walked into the spotlight upon landing a recurring role on Uzalo.

On the popular SABC1 drama series, she was cast as Innocentia. The role earned her love from the end of the viewers and in return fame followed.

Acting is not only what she knows how to do best, Sthandwa is also a Disk Jockey. On the radio, she is a deejay that gets listeners on their feet with the combination of Jamz the are irresistible.

She landed her first lead role in Ifalakhe, an Mzansi Magic series. The show premiered on the night of Sunday, 6 October 2019. It was evident that Nzuza waited for the role, upon landing the role she relocated to Joburg from Durban.

She plays the role of villainous role of the evil queen. The show tells about raging kingdoms set in Southern Africa during the pre-colonial era.

When matching beauty and brains you’ll get a spectacular talent like Sthandwa’s. She is a graduate of a popular University in South Africa. Sthandwa Nzuza attended the Durban University of Technology where she studied drama.

Her date of birth is on 23 February 1984 and the place of birth is in Inanda township, KwaZulu-Natal. Sthandwa Nzuza is 37 years old. She stayed at home most time doing her chores.

“I was the type of girl who will go to school and come back home to do her chores. I didn’t even have a boyfriend until I was in varsity”.

Sthandwa Nzuza is married to a Durban Pastor Philani Gama, the couple got married in a colorful wedding ceremony.

She has landed guest-starring roles in several series on television. Nzuza was cast on the popular drama series Mtunzini.com and popular sitcoms like Single Galz and Perfect Family.

In 2014, she made a guest appearance on an episode of Zaziwa, a music talk show on SABC1. In 2017, she landed a starring role in the popular telefilm Imbeloko. It aired on Mzansi Magic and was first aired on 23 September 2017.

More doors were opened to her following her impressive performance so far. She landed a recurring role on eHostela in 2019. The character is the sister of Fortunate in the Mzansi Magic drama series.

In season three of the popular drama series Uzalo, Nzuza played the role of Innocentia. She made her debut appearance on the twenty-sixth episode of the third season on 13 March 2017.

In the year that followed, in 2018, she came back to the show to play the role in season four of the show.

The year 2019 came with another acting role which was her first starring role on TV. She landed the role of Nomvula in Ifalakhe, an Mzansi Magic drama series.