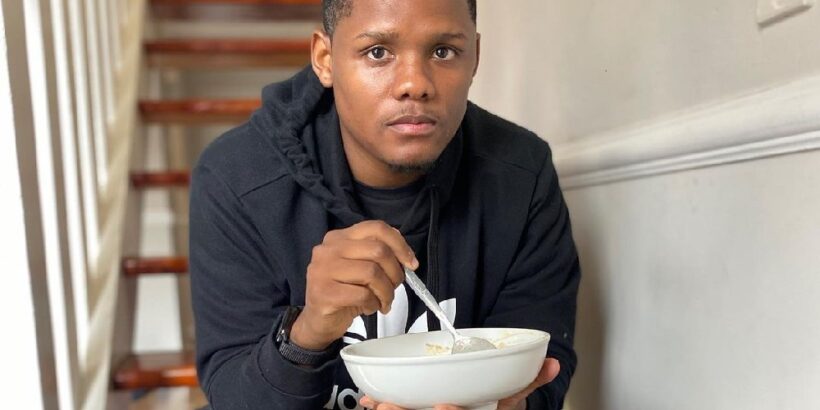 Samthing Soweto (born Samkelo Lelethu Mdolomba; 21 January 1988) is a South African songwriter and singer. He drew the attention of music lovers after he was featured on Akanamali (2017), a publicly praised song by Sun-El Musician.

He dropped his first album This N That Without Tempo in 2010 which is a fusion of soul and acapella. In 2019, he dropped another album Isphithiphithi.

His date of birth is on 21 January 1988 and the place of birth is in Protea North, Soweto, Johannesburg. Samthing Soweto is 33 years old. The songwriter hosts a celebration to remember the day he was welcomed into the world on January 21st.

He was born in Protea North, Soweto and there he was raised. Mdolomba has three siblings and is the third out of the four children. They grew up under the care, guidance, and protection of a single mother.

He relocated to Eastern Cape to live with his grandmother but later returned to Soweto. When he was in eighth grade, he left his academic pursuit following the problem of dyslexia he had.

When he was fifteen, he began to use Mandrax and started participating in crime-related actions. He took part in theses acts as a way of escaping the hard time he faced at home.

Later, he taken to a youth center for armed robbery and there his music interest was born. He started to do music full-time and that was helpful to the artist to overcome the lifestyle of drugs and crime.

His vocal talent stands him out of the crowd and has made him one of the South African artists in high demand. His profession had created the opportunity for working with music groups within and outside the country.

Though many still address him as The Soil musician even after he is no longer in the group. Well, being one of the founders of the group has made him a name.

The Soweto-born artist has also worked with The Fridge, the Nu jazz band. The music band ran for a short while following the relocation of its band members.

Mdolomba has a daughter to whom he dedicated his song Nodoli, which could translate to a doll. He discussed the hardship he passed through which lead to the birth of his four-year-old child.

“My daughter is 80% of the reason I have a music career today. The birth of my daughter compelled me to be more professional and less emotional when it comes to work,”

Whom Samthing Soweto is dating is not known to the public, though ladies are making their move to fill the gap if he is single. Social media has made it easy for the ladies who love the singer to express how they feel.

Well on Twitter, one of those ladies crushing on him decided to make a move and got a green light. Nelisa Ngubane from Pietermaritzburg did a video of herself and asked the singer when he’s going to ask her out.

This became a trend in no time as many anticipated what would be Samthing’s reply. He did reply, and told her “DM me your number”. In an interview with Move!, Nelisa said that she was dead serious and was not joking.

She began to crush on him in 2017 when he broke out with the song Akanamali. Is she the one?

On 6 August 2020, he dropped the album This N That Without Tempo. His other album Isphithiphithi was released on 20 September 2019 as an independent artist.

Danko! his other album was released on 11 December 2020 under the label Youbuntu. His songs and albums are available on CD and online music platforms.