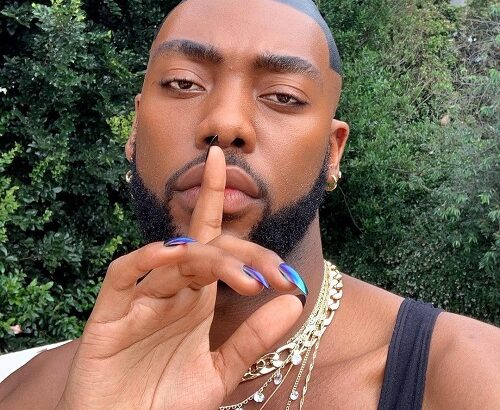 He sources his design inspirations from the African heritage and pop culture. He has also been featured on the editorial pages of the South African and international media.

He has managed to draw the attention of many of him including one of the biggest global brands Coca-Cola.

Rich Mnisi is 27 years old, he celebrates his birthday every year on December 14th.

His love for fashion and design dates back to his years as a teenager. The inspiration came from his sister after she turned a pair of jeans into a skirt.

Rich then borrowed her idea to start to rework on magazine papers and curtains.

His family including his mother and grandmother also inspired him to go into fashion. As he continued to grow, his interest in fashion waxed stronger.

He attended the Leaders in the Science of Fashion (LISOF). He obtained a BA in Fashion Design and Business Management from the institution.

On the 14th of December, 2019, the talented fashion designer hosted a huge birthday party. South African heavyweights in the entertainment industry attended the party.

The Rich Mnisi 2 million party was attended by Bonang Matheba, Boity Thulo, and Trevor Stuurman, among others.

Many people in South Africa think Rich is a member of LGBT. Some publication has covered reports associating him with LGBT.

The fashion icon has not made his sexuality known to the public, though his dressings could say a lot.

His career could be traced back to 2014, the year he established ‘OATH Studio’. With the studio, he could figure out what was the need of his clients.

Still, in 2014, he took home the ‘Young Designer of the Year award’, African Fashion International.

In the year 2019, he made an announcement revealing his partnership with South Guild. Nwa-Mulamula: Alkebulan, his new pieces of furniture, was launched by the group.

His furniture doesn’t only appear beautiful and classy, they also tell a story.

The same year, received the Emerging Designer of the Year award by Essence publication (2019). He bagged the award at Essence’s inaugural Best in Black Fashion Awards.

Clothing is not where his line of business ends, he also works on other projects including the ‘Rich Mnisi mask project’.

The project was born after the emergence of COVID-19 cases in South Africa.

Rich is into furniture designs, his designs cover chaise and stools. He named is design Nwa-Mulamula, after his late great grandmother.

Quality is easy to pronounce but difficult to produce, but for Rich, both come easy.

He has done several pieces for renowned celebrities within and outside the shores of South Africa.

Popular singer Ciara appeared on the ‘Freak Me’ video wearing a dress by him.

In 2018, Beyonce wore a dress by him when she was on a visit to Global Citizen Concert in South Africa.