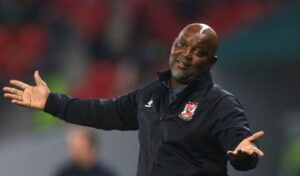 At Jomo Cosmos, Mosimane began his senior career. He later played for Mamelodi Sundowns and Orlando Pirates before joining Ionikos in Greece, where he was coached by Nikos Alefantos. Later, he played for KFC Rita Berlaar in Belgium and Al Sadd in Qatar.

Mosimane began his coaching career as an under-11 assistant coach. This happened during his time at KFC Rita Berlaar in Belgium. He later returned to South Africa to coach the reserves of Mamelodi Sundowns. He joined Supersport United as Bruce Grobbelaar’s assistant coach. From 2001 through 2007, he was the head coach. In the Premier Soccer League, he finished second in 2001-2002 and second in 2002-2003.

In 2007, he coached the South African National Team (Bafana Bafana) as a caretaker coach for seven games. This was before Carlos Alberto Parreira was appointed. He was named the new head coach of South Africa in July 2010 after signing a four-year contract.

Mosimane was appointed manager of Mamelodi Sundowns in 2012. He won the 2016 CAF Champions League by defeating Egypt’s Zamalek (3-1). After the Orlando Pirates in 1995, the Mamelodi Sundowns became the second South African team to win it.

On September 30th, 2020, he was named head coach of Al Ahly. He was the club’s first non-Egyptian African manager. Al Ahly earned their 9th CAF Champions League trophy while leading the squad. In July 2021, they won their second and tenth.

Pitso Thlagale is married to Moira Mosimane, a stunning woman. The pair has been married for several years and has two children, Lelentle and Kopano.

Pitso Mosimane is said to be one of Africa’s top ten coaches, according to reports. Mosimane got a monthly salary of $50k (about R700k) in 2019, according to Kickoff. It has been three years since then. Mohimane is unquestionably a millionaire in South Africa and one of the continent’s wealthiest trainers. He has not revealed his exact net worth to the broader public, nor has anyone on his team.