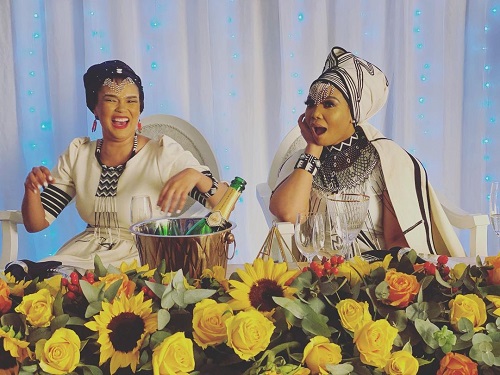 Phumeza Mdabe (née Dlwati; born 15 March 1987) is a South African singer, television producer, model, and actress. She is famous for playing the role of the beautiful front of house manager Phumi in Sokhulu & Partners, an SABC1 drama series.

The South African singer was born on 15 March 1987. Phumeza Mdabe is 34 years old. Like everyone who remembers his or her birthday celebration, she celebrates hers on March 15.

Phumeza Mdabe is a proud mother of Mpilo, who was diagnosed with “bilateral retinoblastoma” when he was just sixteen months old. Both his eyeballs had to be removed to keep cancer from spreading.

News24 reported that she is so proud of her son who learned how to ride a bike even though he couldn’t see.

She took to social media to share with followers and friends. What may seem ordinary to parents to abled children was a special achievement to her.

“We are so proud of you Mpilo. Its a normal achievement for parents with able kids to be able to learn to ride a bike. For Mpilo, because he is blind, he needs to make sure he is safe, takes his time but his spirit amazes us everyday. Akathandi uhluleka. He knows his way around the house so he knows how much distance hes got. You would think he can see [sic],”

Phumeza portrayed a variety of roles in Dube on 2 and Dube on 2 Reloaded, SABC2 comedy series.

In 2012, she portrayed the role of Hilda in Umtshato, a made for television movie. The movie was aired as part of the One Love/Soul City campaign on SABC1.

Still, in 2012, she also landed a cameo role on Generations, playing the role of a young singer Sandra Jacobs, on the SABC1 soap opera.

She is a singer and is signed to the label Shota Music dropping albums under the label. Phumeza had released several albums including “Breathing Out”, “Just Listen”, and “Hello Happiness”.

Phumeza’s exceptional music talent has been recognized, her album “Just Listen earned her a nomination for a Metro FM Music Award.

In 2003, she appeared on season 2 of the M-Net reality competition Idols. She made it to the top 60 contestants before her elimination.

She has done many commercials for top brands in the country including Ponds, Kelloggs, Jet Stores, Nando’s, and Loxion Kulca.

The next year, she became the host of Our Perfect Wedding (season 3) on Mzansi Magic after replacing Brenda Ngoxli. She is also credited with acting on Heist, Isidingo, Legacy, and Unmarried.

In 2021, Phumeza hosted the reality show “Abandoned”, on Mzansi Magic. The show assists orphans who were ignored as toddlers to find/track down their family members.