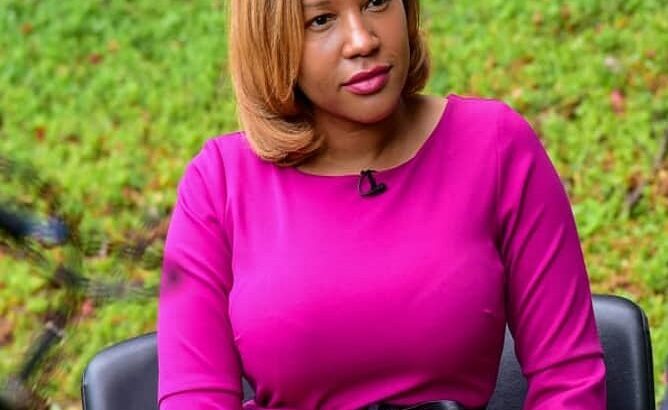 Olive Burrows (born on 16th October) is a renowned journalist in Kenya.

She walked into the spotlight after hosting the ‘NTV prime time news show’.

She also gained popularity for interviewing Barack Obama, former president of the United States, on his visit to Kenya in 2015.

Olive worked for Capital FM and today, she is a news anchor on NTV. She also is the host of the ‘NTV Weekend Edition show’.

Her date of birth is on the 16th of October, the day she also celebrates her birthday. Olive Burrows grew up in Nairobi West.

She was born into the family of a Kenyan father and a Kamba mother.

Her father hails from a mixed background, father (English) while the mother (Tanzanian).

She is the only child her late mother had, though she has half-siblings (sisters and brothers). She grew up in Nairobi West.

Olive studied at Daystar University, from where she holds a Bachelor of Arts in Communication.

In May 2018, she became the face of NTV prime time news after she replaced Victoria Rubadiri.

She anchored the show alongside Dennis Okari. Olive and her colleague, Okari, went became the talk of the day after they made their first appearance on the NTV screen as a team.

Olive has a great interest in writing and she started as an editor at E-Girl.

She worked shortly with the Kenyan Broadcasting Corporation (KBC) for a few months (September 2007 to December 2007).

Olive became popular upon joining ‘Capital FM News’ as a reporter, where she worked for six (6) years until May 2018.

In 2018, she took the position of the new face of NTV prime time news after she replaced ‘Victoria Rubadiri’.

She also had the opportunity of interviewing heavyweights including former president Barrack Obama.

Olive also interviewed Antonio Guterres, UN Secretary-General, and many others.