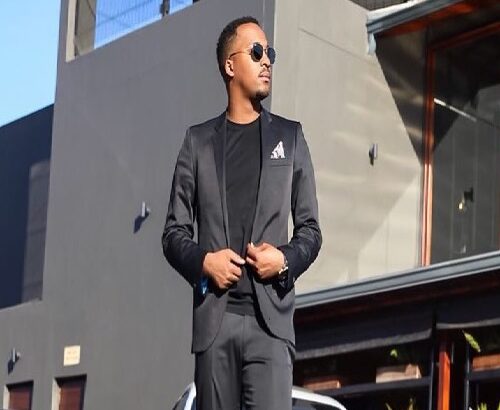 Ntokozo Dlamini (born 8 January 1991) is a South African actor. The actor has gained popularity not only for his character on Uzalo but his looks. The handsome man has managed to keep up in the industry with his impressive performance on television.

He is well-known for his role on Uzalo where he was cast as Mastermind Maphumulo. Though the SABC1 program has raised and featured many household names, his unique acting talent gained him a slot.

His looks have had many ladies crush on him, sorry he is taken. On the show, he put on a character of a gangster, Mastermind. Even with many popular faces on the show as mentioned earlier, he has managed to be one of the favorite actors.

On 8 January 1991, a child was born into a middle-class family at Pietermaritzburg, KwaZulu-Natal, his name is Ntokozo Dlamini. He was raised in KZN.

This is a huge confirmation to many who argue his date of birth and place of birth. He was welcomed into this world in the early nineties.

Dlamini supported his talent with a formal education, which is a combo that many who record success today utilizes. He attended Varsity College in Westville, Durban, South Africa. In the institution, he studied for certification in International Marketing Management.

Ntokozo Dlamini is married to Jessica Nkosi, an actress popular for appearing on the show isiBaya. Their union is blessed with a baby girl who they named Namisa Dlamini.

Sorry ladies not only the handsome actor is married, he has a daughter. The couple welcomed the new member of their family in September 2018.

The former Uzalo actor was caught in a breakup rumor with his wife. The stories spread like wildfire but did not impress the businessman at all.

The rumor claims that the couple has gone their separate ways, calling their relationship a quit. He did not waste time responding to the circulating story.

He told Move! that there was no such, he called it “hogwash“. He further noted that they were together and never broke up.

Sunday Sun published a report on TK and his wife. The story covered that the couple did not attend an event together following their break up.

According to the former actor on Uzalo, Jessica was not present the July and never set foot at Grayville racecourse. Rather, he went with the company of some friends.

Many know Ntokozo for his role on a popular SABC 1 series, Uzalo. Before he appeared on the show in 2015, he has featured in other television series.

He was cast in the fan loving series Soul City and also landed a cameo role on Rhythm City. Well, yes! he was in these television series, and also in Single Ladies.

Among what he is good at is hosting. Yea! he has landed jobs as a show host. Ntokozo was twice the host of the Mzansi favorite Durban Hip Hop Awards (2011 & 2012).

Are you convinced that the Ntokozo is a jack and master of all trade? Still no? The popular face on television can speak three (3) different languages in South Africa. Aside from the English language, he fluently speaks Xhosa, Sesotho, and Zulu languages.

The actor dreamt of gracing the international scene as interested in the American show, Two and a Half men. Take a close look and observe his stature. You’re right! He is an active sportsperson and plays football, hockey, and cricket.

In the business field, he is an expert and had his training in higher institutions. His career abilities flow to presenting on radio, singing, and dancing. Common he one of the few personalities in the country that can do handle many professions and do them well.