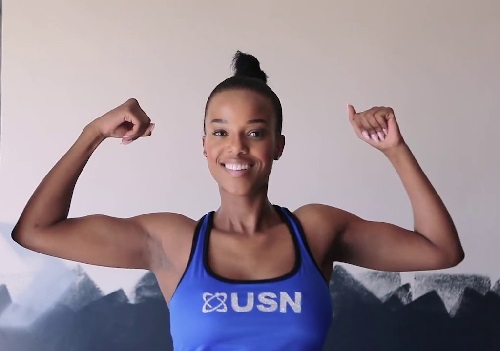 Nonhle Ndala (born 23 May 1983 in Heidelberg) is a South African reality star and a fitness trainer.

She became popular for being part of Diski Divas, a reality show on Mzansi Magic channel 161.

She is a fitness trainer for Bootcamp Mzansi – Celebrity Edition and has worked in sales and marketing.

Nonhle Ndala is 37 years old. Her birthday celebration comes up every year on May 23rd.

She is married to Andile Jali. The couple had a traditional Xhosa ceremony to cement their union.

Reports covered that Nonhle was paraded through the streets of their township by her mother-in-law.

Their union is blessed with twins, the couple welcomed their newborns in June 2017. Andile and Nonhle named their children Andile Junior and Amarè.

She was previously married to Themba Msiza and their union was blessed with a daughter they named Aurelie.

Nonhle became a mummy to her daughter at the age of seventeen (17).

After they called their marriage a quit, the couple went their separate ways and Nonhle joined the gym.

She shared with the Mamas & Papas magazine that Heidi Klum inspired her.

Her source of inspiration also underwent ‘public betrayal’ and still managed to be good looking.

Her workout earned her a position as the ambassador for fitness training supplements.

She went on TV and radio interviews on fitness and was invited by one of the producers of Bootcamp Mzansi series to come on the series as a trainer.

In her words, she left the marriage because she was belittled and ended up lacking self-belief.

She also mentioned that things grew worse as her ex-husband began to get possessive, abusive, and jealous.

This followed shortly after his business started being successful.