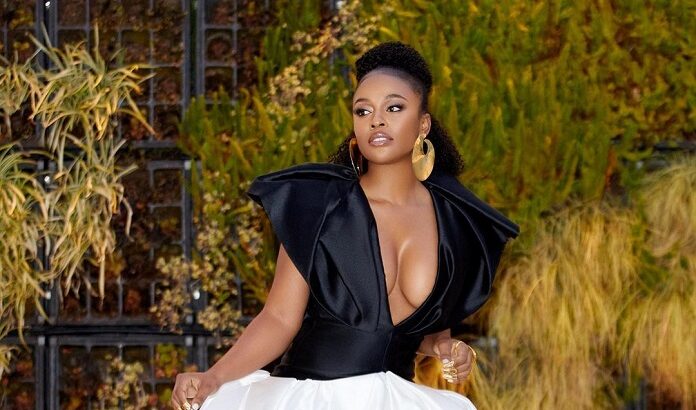 Nomzamo Mbatha (born 13 July 1990; KwaMashu, KwaZulu-Natal) is an award-winning South African actress. She got her name on the lips of several television viewers after finishing among the top three in the 2012 MTV Base VJ Search.

Acting is not the limit of what she is good at though. Nomzamo is also a television personality, model, entrepreneur, and human rights activist.

The prominent South African celebrity is also popular with television viewers for being cast on the soap opera Isibaya. The role further brought her into the limelight and gained her presence on social media.

Yes! She is also a renowned personality on social media and has continued to grow her fan base through the platform.

Her date of birth is on 13 July 1990 and the place of birth is in KwaMashu, KwaZulu-Natal, South Africa. Nomzamo Mbatha is 30 years old and is of Zulu ethnicity.

The actress was born into the family of Skuta Nxumalo (father) and Manakutu Mbata (mother). Sadly, her father is late and was not enthusiastic about her being a model at beauty pageants as a small kid.

She had her primary school at Sihlezi Primary School. She later furthered her academic pursuit at Bechet High School. Nomzamo got admission to the University of Cape Town.

In 2018, she graduated with a Bachelor of Commerce with an accounting specialization. She is true, a beauty with brains.

Her family life is filled with tragedy starting with the death of her father. In 2009, she lost her older sister and In December 2014 her younger sister committed.

Wendy is now her only surviving sister and her brother’s name is Zamani Mbatha. Her sister is popular for District 9 while her brother is a popular figure and an actor.

She was dating a media personality by the name Maps Maponyane. However, their love story ended in 2018 after Maponyane allegedly cheated on her. He went ahead to cheat on her with several other women including a Cape Town blogger, Nadia Jaftha.

In 2019, she was spotted with Kagiso Rabada, a cricketer Kagiso Rabada. She then made headlines to be in a romantic relationship with him. They were only seated next to one another in a match in Cape Town.

In July 2012, she appeared among other hopefuls to audition for a TV show. She was cast as a main character on the popular soap opera Isibaya.

The search took place in Cape Town and had over 600 contestants. She later made it to the top seventy and later had a spot among the top 10.

Eventually, she emerged as one of the top three finalists. In 2014, she played a starring role in a show that was later converted into a daily Tell Me Sweet Something, and a TV show Umlilo.

In the same year, she started to be the host of Holiday Swap, a reality travel show on SABC. Mbatha was also chosen to represent Neutrogena in 2015. This earned her the record as the first South African in that role.

In 2021, she made it to the blockbuster movie Coming 2 America. Earlier, in 2020, she had signed with Creative Artists Agency, a talent management agency.

She is the face behind the much-loved character Thandeka on Isibaya, the love has been extended to her in real life. Though she left the soap opera after making her last appearance on the show on 2 March 2020.

Thandeka, the role she played, was murdered by Judas (Menzi Ngubane). The character started with the show and had been for 7 seasons.

Leaving the show came with another opportunity as she landed a role in Coming to America 2. The movie was scheduled to be released in December 2020.

Her talents have earned her several awards and recognitions. She has grown from being a local actress to making waves on the international scene. She has landed several roles and killed them all, little wonder she has received many awards.

In 2013, she took home the DRUM Darling Award for Rising Star and Feather Awards for Hot Chick of the Year.

She was recognized as one of the Okay Africa 100 Women 2018 Honorees conducted by Okay Africa Digital Media.

Forbes also named Nomzamo among the 30 under 30 creatives in June 2018. She also made it to the cover of this issue.

She received an activism issue cover at Cosmopolitan following the fantastic work she did at UNHCR.

In 2019, she received a nomination as the SASTAs, Best Actress and took home the Philanthropy Award from EAfrica!

The award-winning actress has earned a lot of money from her career as a model, actress, and entrepreneur, among others. In 2019, According to Briefly, Nomzamo is estimated to have a net worth of around USD 1million – USD 5million.

We expect an increase in her net worth since she landed a role in Hollywood. Even with her bitter life experience, she did not allow it to come between her goals and aspirations in life. She is indeed a strong woman and a source of inspiration to many women.