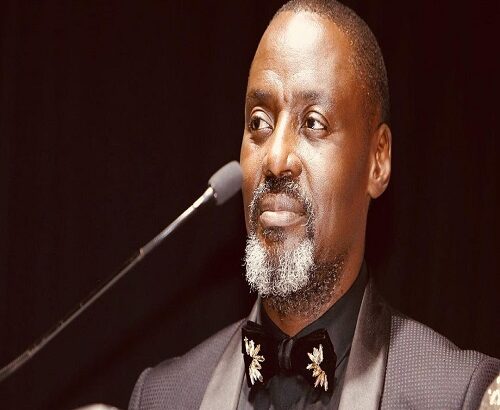 Nimrod Nkosi (born around 1971-73) is a South African television presenter and actor.

He is popular for being the presenter on Lotto draw, a live show on e.tv. He was also a host on Jam Alley, a youth variety show.

Nimrod Nkosi was dating Alice Myeza in 2003, the aforementioned post by News 24 mentioned.

She got him over the moon after telling him that she was pregnant with triplets.

According to the report, he spent almost R20,000 on baby paraphernalia. Nimrod later discovered that it was a lie.

Nimrod is married to Charlene Nkosi and has been married for eight (8) years.

He is a father to a six (6) year old son. The actor says “family will always be his top priority”.

In 1994, the actor started a career in acting after landing a role on U Bambo Lwani, a drama series. He then got another role on Pale Toe, an Afrikaans rugby drama.

Nimrod had a five (5) year stint as a presenter on the youth variety show, Jam Alley. He received two (2) Avanti awards as Best Presenter.

H has also landed other roles on television including The last hope on SABC1 and also a supporting role in Soul City.

On the e.tv soap opera Scandal, he portrayed the role of Hector.

Nimrod has also been the host on Your Late Mate, a late-night show that airs on Saturdays on Soweto TV.

In the year 2007, he started to be the host of the Lotto game show Raise Your Game, alongside Vanessa Carreira, a former Miss SA. The show aired on Wednesday Night after the Lotto draw.

In 2013, he started to host ‘Gospel-themed show, John 14 on Mzansi Magic Music, a DStv channel.

On the show, Nimrod paid a visit to the viewers’ house where they serve him food and shared testimonies of their faith.

In 2015, he became the host on Utatakho, an Mzansi Magic docu-reality series, replacing Zola.

Nimrod also contested as a guest in season two (2) of I Love South Africa, an e.tv game show.