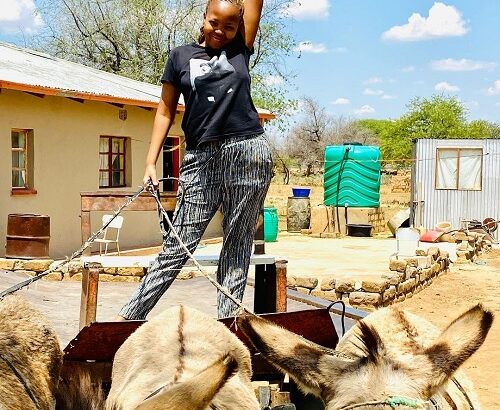 Neo Ramitshana (born in Mahikeng, North West) is a South African actress and marketing executive. She became known in the entertainment industry for playing the role of Botshelo on Skeem Saam (Season 2).

She drew the attention of audiences after finishing as a top-three finalist in the Face of Turf competition.

She had her matriculation at Midrand High School. Neo Ramitshana furthered her academic pursuit at Midrand Graduate Institute. She studied Bcom Law in the institution.

According to the actress, landing the role on Skeem Saam and her appointment as Ndalo Media’s Destiny Magazine Marketing Executive was a huge highlight and achievement.

“Landing a role on Skeem Saam and being appointed Ndalo Media’s Destiny Magazine marketing executive is a huge highlight and achievement for me”.

Her source of inspiration is her mother who independently raised her and her siblings. Neo’s mother is among the few black women who qualified with a Masters in Maritime.

Neo welcomed a new member of her family, her second child. The actress who loves her first daughter now has another one. She took to social media to share her joy with fans.

She revealed that her baby is a girl and shared a photo of her little one’s little leg.

“End of My Pregnancy journey and beginning of another lifetime of memories. Blessed… Thankful… All Went Well. We Welcome Mathapelo-Warona Rebaone Mopeli to the World,”

The Skeem Saam actress gushed over her partner revealing her growing baby bump. She was expecting her child with her partner and shared on social media how she was not ready for a baby but her partner convinced her.

“This guy has been waiting for moments like these through out this whole relationship! Like he’s been campaigning for a baby for the longest time. I ended up saying, For as long as you keep asking for permission it won’t happen anytime soon”.

“Then he went and did it!… I was so upset at first. And he was so sorry…Shem! But now I’m so glad we did it! I don’t think I would’ve ever been ready-ready to do this. There would’ve always been the next goal to meet. I’m glad you took an executive decision Mr!,”