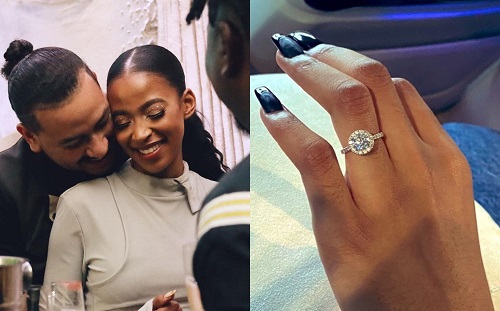 Nelli Tembe (born in 1999) is making a wave on the internet for being the new lover of the renowned South African rapper, AKA. The trend could be traced back to the time when her boyfriend’s mum liked one of her pictures on social media.

After AKA shared a picture of hers on social media, Lynn Forbes, his mother left a heart emoji reaction. Followers and fans of DJ Zinhle did not keep mute to this but reacted fast.

Most of them claimed that Lynn was using the deejay to gain popularity, there is some sense to this claim.

Do you remember the famous kid on Instagram, Kairo Owethu Forbes? Yea! Lynn is her grandmother and the manager of her account.

The young girl is now a big brand on social media and has over a million followers. When Zinhle and AKA ended their romantic relationship they shared in 2015, Lynn sided with DJ Zinhle.

AKA expressed his shock on Twitter in 2016 and made claims that Lynn, his mother, did not like Bonang, his girlfriend.

He further gave the reason to be because she was still in a close relationship with the deejay upon they were no longer in a romantic relationship.

Her date of birth is in 1999 and reports covered that the Nelli hails from Durban, a coastal city in eastern KwaZulu-Natal, South Africa. Nelli Tembe is 21 years old.

Nelli has an older sister Nondumiso Tembe, a popular actress in South Africa. Her sister is known to cast on the popular Mzansi television series Generations.

She portrayed the role of Miss Maya in the television series. Reports covered that the Nelli hails from Durban, a coastal city in eastern KwaZulu-Natal, South Africa.

Nelli Tembe is dating a popular rapper Kiernan Jarryd Forbes. The couple has been dating for a while now has decided to climb another ladder in their relationship. In February 2021, the couple set the internet ablaze after revealing that they were engaged.

The trend was fueled by the picture of a stunning engagement ring on Nelli’s finger. The post gathered over three thousand retweets in no time after AKA shared it.

It was confirmed on Nelli’s Instagram page after she couldn’t hold back her joy to be a fiancée to the popular rapper.

South Africans had little or no Knowledge of Nelli until a video of her and AKA smooching in a restaurant went public in January 2020. People thought AKA was a cheat at that time without knowing that DJ Zinhle and the rapper had ended their relationship.

To set the record straight, AKA had to address the video telling fans and those interested that it was on some “TMZ” level. The rapper also said that he owes no one an explanation since he had been single since 2019.

Upon dropping the EP Bhovamania, Kiernan Jarryd Forbes shared that he and his girlfriend Nelli worked on a track. According to him, the couple worked on the song Finessin.