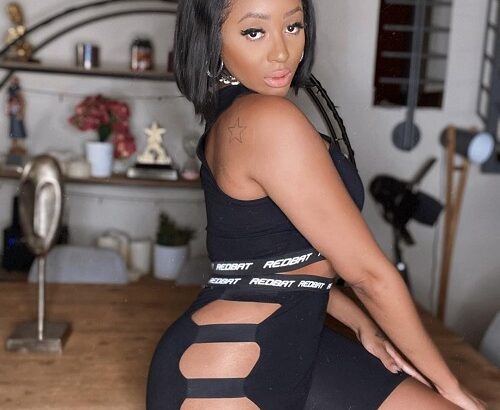 Bragga (born Nadia Nakai Kandava; 18 May 1990) is a South African rapper and songwriter. She has managed to beat the competition in the industry and has made a name for herself.

She boasts as the first female rapper to win the Mix Tape 1010 competition on e.TV. She is making waves in the Mzansi entertainment scene with her hit songs. Let start with her early life, where her story starts.

Though she is often called Bragga, she was born Nadia Nakai Kandava and was welcome to her family on 18 May 1990. She was born into a family of mixed ethnicity, her father is a South African while her mother is a Zimbabwean.

She went by the name Nadia Dlamini until she was sixteen years old when she adopted her mother’s name, Nadia Nakai.

Upon completing her high school education at Fourways High School, Nadia continued her academic pursuit in a higher institution. She studied for a double major in Media Studied, Communication, and Marketing at Monash University.

She later relocated to Kenya to continue her studies there she connected with Nazizi. Meeting the Kenyan female rapper had a great influence on her music.

Nadia’s music career dates back to when she was under Nazizi’s mentorship in Kenya. This made her come up with the decision of becoming a professional rapper.

She holds the record as the first female rapper to win e.tv’s Shiz Niz’ Mixtape 101 Competition. In September 2013, she dropped her debut single “Like Me”. As a rapper, she released her first single under Sid Records.

Nakai landed a feature on Amantombazane Remix. She collaborated with Ice Prince, a Nigerian artist, on Saka Wena upon performing at the Chanel O music video awards. In 2018, she was opportune to rap for Sway Calloway.

As a host, she was selected as a red carpet host for MTV Africa awards, Bilbao Spain.

She dropped her first album, Nadia Naked, in 2019 and has been recognized among the best female MCs in South Africa. Though music lovers and her fans anticipate Nadia Naked II, the rapper has to give a hint to drop the second album.

She fulfilled her promise and gave fans what they want, Nadia Naked. The song made waves in the country and in lo time climbed to number one.

The album features household names in the industry including Kwesta, Kuli Chana, Tshego, and Lady Zamar. It also features Vic Mensa, a rapper, singer, and record producer from the United States.

Fans and music lovers sure loved the Nadia Naked II album earning her “the best female rapper in Africa”. This increased her fan base as she records a huge presence on social media. Nadia sure knows how to impress lovers of good music no wonder her name is on many lips in the country.

Nadia revealed in an interview session how she was able to work with the Nigerian artiste, Ice Prince. According to her, she bombarded him with emails as she requested a collaboration.

Fans and followers of Nadia Nakai music get a raw update of her songs on her YouTube channel. Nadia Nakai YouTube Channel has around 36.5K subscribers.

Rumors had it that Nadia Nikai was dating Bandile Mbere. They confirmed that they were in a relationship in 2018 but seemed their relationship did not last long. The following year, they called the relationship a quit. Her track “More Drugs” on her first album was a product of the heartache over the breakup.