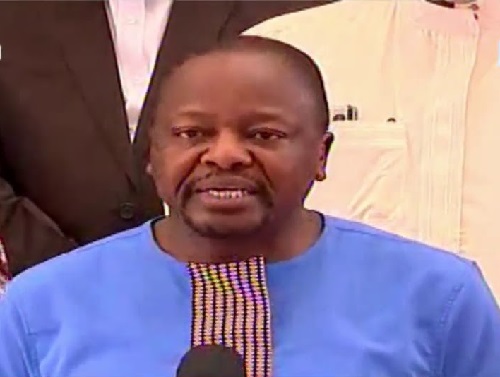 Hon. Mutahi Kagwe (born in 1958) is a Kenyan tenured politician and currently serves as the Cabinet Secretary for Health in the Republic of Kenya.

On 28 February 2020, he took his oath of office and has served as the first senator of Nyeri County, Kenya.

The politician was born in 1958 and his place of birth is in the Kenyan colony. Hon. Mutahi Kagwe is around 62-63 years of age.

He had his primary school education at Kihate Primary School from 1965 through 1971. Hon. Kagwe furthered his academic pursuit at Kagumo High School and had his ‘O’ and ‘A’ levels from 1972 through 1977.

From 1978 until 1981, he attended the University of Nairobi and graduated with a Bachelor of Commerce (Insurance) degree. He also holds an MBA from the United States International University (USIU) for four years (1988-1992).

She has served in many firms and serves as an advisor on Small and Medium-sized Enterprises (SMEs) in President Uhuru Kenyatta’s government.

Hon. Mutahi occupied the position of the fifth Member of Parliament for Mukurweini Constituency, Nyeri Kenya, and served for five years (2002-2007).

During his days as a member of Parliament, He served as the Chair of the Parliamentary Committee on Finance, Trade, Tourism, and Planning. He was later appointed to the position of Cabinet Minister for Information and Communications.

In March 2020, Hon. Mutahi led the National Emergency Response Committee of Kenya in the fight against the coronavirus pandemic. He put incredible efforts amid domestic and local challenges.

During his days as a Cabinet Minister, he leads the construction of the transformational East African Marine System (T.E.A.M.S). It is also worth mentioning that Kenya launched ‘Mpesa’, which is the first-ever mobile money transfer system in the world, during his term as Cabinet Minister.

He takes credit for championing an Early Childhood Education program that aspires to promote the quality provision of ECDE nationwide “The Best Classroom”.

Hon. Mutahi still takes credit for sponsoring the Cyber Security and Protection Bill in the Senate of Kenya.

He is a professional member of the Marketing Society of Kenya and the Kenya Institute of Management. He is also a member of the parliamentarian network of the World Bank, and the commonwealth parliamentary association.

Aside from his political career, he occupies and previously held notable positions. Hon. Mutahi served as the Chairperson of several cooperate boards and was the Multimedia University Council Chairman.

With The Elder of the Golden Heart, the President of the Republic of Kenya commended him to recognize his distinguished service to the nation.