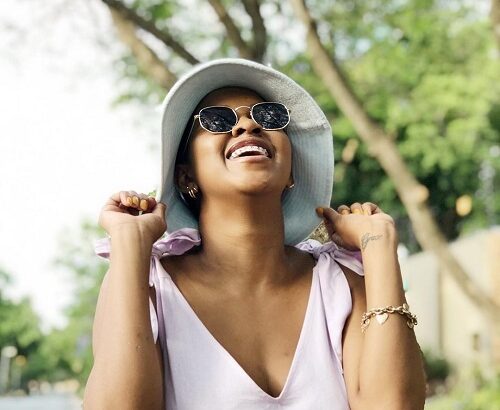 She gave her life to Christ at the age of 13, making her a born again Christian. She is also a YouTube and founded Aneno Beauty.

Mpoomy Ledwaba is 26 years old. She celebrates her birthday every year on January 23rd.

She relocated to Johannesburg to attended the University of Johannesburg (UJ). At the higher institution, she studied Accounting.

During her second year in the University, she got a job as a Banker at Investec. Though she dropped out of the University eventually.

Mpoomy is married to Brenden Praise, an African Idols finalist and recording artist.

Their marriage introduced her to the media-crazy masses, she received earning her quick likes and follows.

The couple is blessed with two (2) children a boy and a girl. They celebrated their daughter Nuri’s second birthday. Mpoomy shared on social media

“2 years ago on this day Nuri, showed us exactly who she is. Hubby and I were on our last vacay without kids, did girl not decide to show up. Literally had to drive 4 hours to get me to hospital.”

She also shared a lovely picture of their daughter celebrating her birthday.

She began to sing at the age of five (5) with her father, four (4) siblings, and church choir.

As a back singer, she backed renowned singers like Donnie McClurkin, VaShawn Mitchell, and Dr. Tumi.

After she left school, she tried to find her way and then joined a modeling agency.

She landed the first job on a billboard and a television advert.

She followed the footsteps of her father and had an investment in a cleaning business.

Mpoomy made fliers of her business and shared them on WhatsApp groups.

After getting married, her husband have her R15,000 to go to nail school.

Three months later, she was ready to work but wasn’t hired by anyone.

She had to advertise her services on her car with a poster and then began a nail salon. Today, she is an employer of six (6) people.