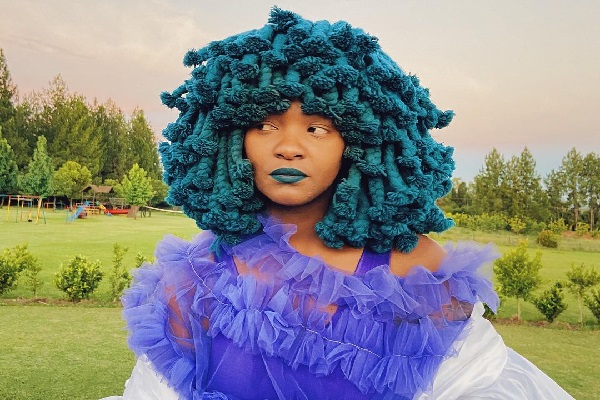 Moonchild Sanelly (born Sanelisiwe Twisha; 20 November 1987 in Port Elizabeth) is a South African dancer and musician. The much-loved artist has gained popularity for her exceptional dancing moves. People can testify that the country encourages and admire talents, which is her weapon against the competition in the industry.

Her unique signature “blue-colored hair” coupled with her music genre “Future ghetto punk” which she created added to distinguishing her out.

The Port Elizabeth-born artist tested fame in Durban poetry and music before she moved to Johannesburg, South Africa. In her new location, she continued to push her career in music.

Talent and passion are sure ways to stand out and survive in the industry of thousands of competitors. Today her music has touched neighboring and other countries in the African continent.

In 2018, Moonchild was on a European tour alongside Die Antwoord, a hip-hop group in the country. Can you guess how she has managed to capture the mind of music lovers? Yes! her music is a fusion of experimental electronic elements, Afro-punk, and edgy-pop.

She is one of those dominating the South African music industry, thanks to her strong kwaito, hip-hop, and jazz background.

The dancer was born in Port Elizabeth, a city on Algoa Bay in Eastern Cape, South Africa into a musical family. Moonchild Sanelly’s mother is a jazz singer, her brother is a hip-hop producer while her cousins are kwaito dancers.

Being from a family with a musical background, she perhaps picked up an interest in doing music as she spends time with them. In 2005, she relocated to Durban. In her new place, she studied fashion at Linea Fashion Design Academy.

In 2006, she began to hold a performance at Durban University of Technology. Moonchild focused on poetry and hip-hop and never called herself a poet until reactions from her listeners.

Moonchild was later featured on the show Poetry with King Siso, a weekend show on Gagasi FM. Her unique style of music and performance was discovered by many including big names and brands.

One of the popular brands interested in her was Red Bull. The brand discovered her through an EP Moonchild was featured on with DJ Shimza.

In 2019, On Beyoncé’s The Lion King: The Gift album, Moonchild was featured on one of the tracks “My Power”. The same year, she released a four tracks mini album project titled Nude EP (2019).

It is worth mentioning that she contributed to the first track of Zingah’s 2020 album, titled “Our Culture”. In 2020, On JazziDisciples album, 0303, she was featured in the track Askies.

Later, Sanelisiwe was featured in the studio album Song Machine, Season One: Strange Timez. She was in the song With Love to an Ex.

Like many other South African female celebrities that sure know the value of their body Moonchild Sanelly does not back down from flaunting her body. Most times she is seen as a “shex figure” and also speaks about shex.

The artist uses her social media platform as a medium to give out advice on Valentine’s Day. Speaking to Basha Uhuru during an interview session, she describes herself as “the president of female orgasm”.

On January 8, 2021, she shared a cartooned picture of herself in a white see-through gown. With a glance, her blue bikini can be seen with ease. From her private region, a blue viper seems to be crawling out. She left the caption; “Every Woman can fuhck up the world! It’s all in us.” Many of her followers and celebrities liked the picture including Pearl Thusi.

Her career goes beyond music, dancing, and giving out shex related advice. She is a businessperson and owns a clothing label “Moonchild Cultwear”. Moonchild also runs a “Naked Club” and shares that the club is not a brothel.

She is dating Oarabile, a copywriter and a musician, and a mother to three (3) daughters. Though she doesn’t stay with her children at the moment as they stay with their paternal grandmother.

Moonchild makes out time occasionally to pay them a visit in Port Elizabeth. Artemis is one of her daughters has taken the footsteps of her parents.

Moonchild Sanelly boasts of a decade and two years of experience in the industry and has touched other places in the world with her music. She has been raped twice in her life and sadly, her uncle was one of those who raped her.