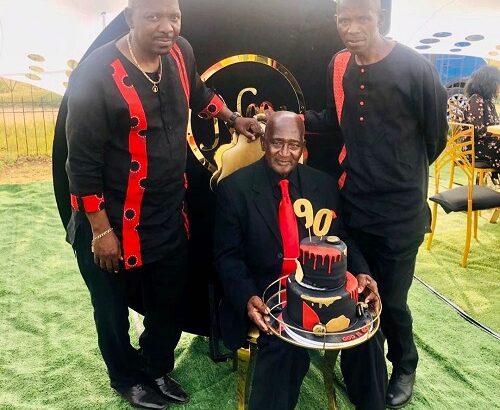 He is popular for portraying the role of Sibusiso Dlomo, or Ngamla, on Generations, a popular Mzansi series.

His date of birth is on the 28th of August 1964 and the place of birth is in Ladysmith, KwaZulu-Natal, South Africa.

Menzi Ngubane is 56 years old, he celebrates his birthday every year on August 28th.

Menzi got married to Sikelelo Sishuba, the couple cemented their union in an elaborate Zulu affair in 2018.

Though the actor was married once to Lerato Sedibe, the marriage did not have a till death do us part ending after they divorced in 2013.

Ngubane’s father turned ninety years old in March 2020 and is enjoying the gift of long life.

The actor and his wife threw a party for him in a red-and-black themed birthday party held in Ladysmith. Close friends and family were present to celebrate with the family.

The primary aim of the program is to actively mentor young boys and also to address the impact caused by social ills.

He hopes to encourage young men to follow a healthy lifestyle through the program.

He is a survivor of Kidney failure and was hospitalized for three weeks.

Menzi was put on dialysis for five years (2010 – 2015) while on a kidney transplant waiting list. Ngubane later revealed that he eventually receive a transplant.

He took home an Avanti Award nomination in the category Best Actor in a Drama.

Menzi has also appeared on the South African screen playing several roles including Jerom on Gaz’lam.

He received votes as the ‘Most Stylish Actor in a drama for Gaz’lam and took home an Elle/Sunday Times Magazine Award.

In 1991, Menzi was in A 100-year Celebration of the South African National Anthem, a theatre production. He also appeared in Kamieng which was directed by Sello Maake Ka-Ncube.

He appeared in Seazar which is an adaptation of Shakespeare’s Caesar. The play was staged here in South Africa and oversees in the United States.

In 2004, Menzi played a starring role in the movie ‘Country of my Skull’ alongside popular actor Samuel L. Jackson. Antjie Krog wrote the movie and it was directed by John Boorman.

He took home the Star of Mzansi award in 2008 and received a One million Rand prize.

Menzi was fired from Generations in 2014 with fifteen of his colleagues.

This followed after they engaged in a ‘wage dispute’ with Mfundi Vundla, the creator of the show.

He landed the role of Detective Nkonzo Mazibuko in Ashes to Ashes, an e.tv telenovela, in 2015. Menzi made his first appearance on the show on Thursday, 9 July.

He then landed another role as Patrick Gumede’s brother Isreal and made his first appearance on Friday 30th October in the same year.