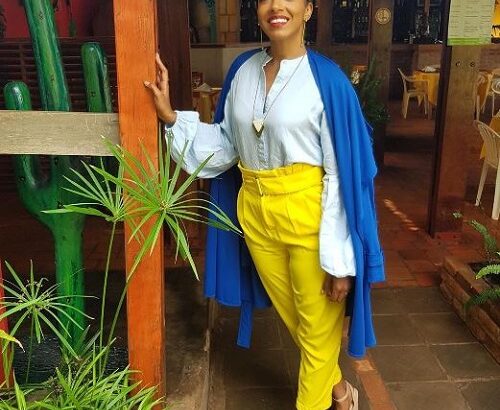 Makeda Mahadeo (born in 1987 in the U.S.) is a Jamaican-Rwandan disk jockey, producer, and presenter. She has gained popularity on television after she joined CNBC Africa.

She featured on the radio program The SWITCH on Contact FM for over five years, half a decade. On television, she was also a co-anchor and co-producer on Rise and Shine Rwanda, a breakfast TV show.

Makeda also boasts as one of the first female disk jockeys her country produced. On streaming sites, she is active and shares viewers with creative content on her channel.

The deejay was born in 1987 in the U.S. into a family of mixed race. Her mother is a Jamaican while her father was a Rwandan. Sadly, she lost her father who was also a popular personality.

Makeda’s father’s name was Aloys Karamuheto but was popularly addressed as Bogoman. He made waves in the music industry while he was alive as a Rastafarian DJ.

She credits her late father as her greatest source of inspiration. Makeda grew up and had her academic pursuit in Jamaica.

She holds a BA degree in Literature from a renowned university in Jamaica and has recorded much success working as a radio disk jockey and a mixer. She knows how to make good mixed with her distinctive style and experiences.

Little wonder, she is a household name and is praise in the Rwandan music industry. Makeda could easily play several music styles like Top East African music. However, her favorite music styles were dancehall and reggae.

The popular disk jockey and media personality was featured as the most popular Rwanda’s Social Media Maven by CNN. On social media, she has also gained a presence and boasts of over fifty thousand followers on IG.

She drew the attention of many after choosing a career in the media industry. Her persistent effort was instrumental in earning her the place where she is today.

In 2019, she appeared on the East African Got Talent as a judge. In an interview session with the Daily Nation, Makeda opened up that she was happy upon hearing that she was chosen as one of the judges on the talent show.

She made her debut in showbiz as a Deejay in 2010 which brought her fame. She landed her debut show on television during her days on campus.

The local Deejay Makeda Mahadeo is married to Sacha Haguma. The couple cemented their union in a colorful wedding ceremony which took place at the Inzozi Beach Hotel in Gisenyi on 30 November 2017.

The couple exchanged their marital vows at 3 pm in a religious ceremony. On 24 November the couple had earlier made their vows at a civil marriage ceremony in the Kinyinya sector.

Both the civil marriage and religious wedding were graced by invited friends and family.

Makeda Mahadeo has managed to make a name for herself in the local entertainment circuit as a Disk Jockey.

She was able to take the stand even when men were dominating the industry in 2010. She then grew more famous after she landed a stint as a radio jockey at Contact FM.