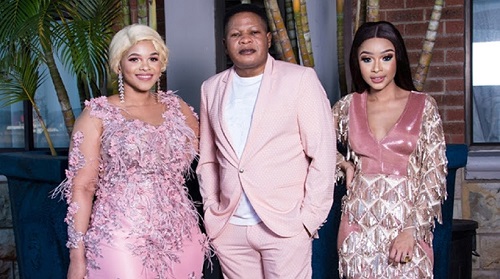 Lucky Gumbi (born in Jozini) is a businessperson, mining magnate, and polygamist.

His place of birth is in Jozini near the Swaziland border. He grew up in Mtubatuba on the far north coast of KZN.

He says that polygamous marriage works where there must be honesty from the men’s side.

He is also into coal transportation and construction businesses. Today has scored his reality television show, The Gumbis.

In 2018, Lucky shocked social media users after he made a payment of R260,000 for his wife’s bridal shower.

He got married to his second wife in a memorable wedding celebration. The wedding ceremony that cost him R4,000,000 was held in December 2018.

His first wife is other than the second with about six (6) years of age.

His show, The Gumbis, premiered on SABC1 as the polygamist and his wives.

He said that the primary aim of the show was not to flash his wealth.

“It was about what has made him and how he made it work with his wives”.

Lucky owns a house in Richards Bay and in Balito, 40km north of Durban.

He did not venture into polygamy to father many children and wants to be able to give his children everything they want.

“I’m not obsessed with having many kids, the four that I have so far are OK…”