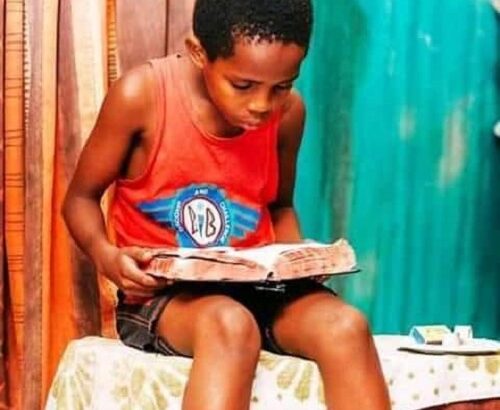 Tebello from Scandal (born Litlhonolofatso Litlhakanyane) is a South African young actor. He is famous for playing the role of Tebello on Scandal, an eTV weekly soapie.

The young star portrays the role of a twelve-year-old on the e.tv soapie. Litlhonolofatso Litlhakanyane is 10 years old, according to Youth Village.

In reality, Lithonolofatso’s mother’s name is Palesa and she couldn’t be prouder of her son.

She says that her son is a very shy boy in reality though he portrays a confident personality on-screen.

His brother, Tlonolofatso, is an actor and also appears on the show playing the role of Thabo

His sister convinced him to try out auditions after she came across an advert for a child actor on Facebook.

His sister had to beg him to go for the audition, he eventually did and the directors couldn’t help but fall in love with him.

He then landed this role after many callbacks. He plays the role of an abandoned young child who took care of Yvonne’s frail mother.

His acting skills have earned him both praises and sympathy from the viewers.

The talented youngster has kept many viewers glued to their screen with his exceptional acting talent. The character, Tebello from scandal, is twelve years old.

Though the character, Tebello, is his debut gig in acting, he has captured the love and support of many South African viewers.