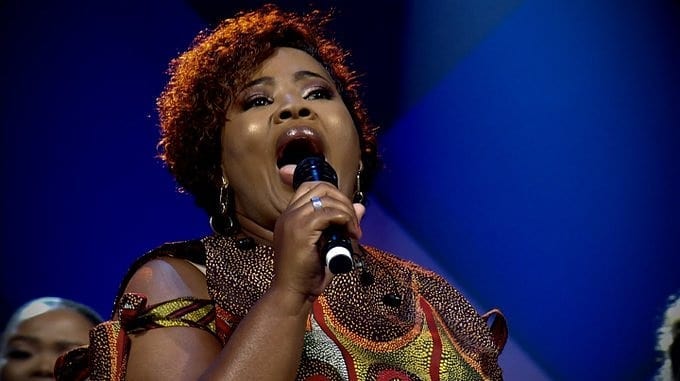 Lebo Sekgobela (born 19 September 1981 in Sebokeng) is a South African Gospel musician. She a household name in the industry and has taken home several awards and received nominations too.

She is so passionate and resilient in the ministry which have been instrumental in taking her to where she is today. With her songs, she has been able to touch many music lovers within and outside the shores of the country.

Though Labo had a humble beginning, she never gave it the chance to come between her and the future. The amazing personality has also been rejected after appearing among other hopefuls in auditions.

Lebo never allowed these challenges to discourage her rather she pressed forward. Today, her patience, talent, and resilience have paid off.

Her date of birth is on September 19, 1981, and the place of birth is in Sebokeng, southern Gauteng, South Africa. The town is located close to the industrial city of Vanderbijlpark and Vereeniging. Lebo Sekgobela is 39 years old.

She is married to Lucky Sekgobela and they boast of over two decades of being together. This makes their love for each other evident. Lucky has also been instrumental to the progress of her profession being her manager.

The Sebokeng-born developed her career in music when she was still young. Though her journey to success was not smooth, she attended several auditions but was not among the selected. However, she refused those to affect her pursuit in industry, later she began to perform in church.

She has also held performances in crusades organized by Evangelist Ralekholela. Lebo gained further experience while she worked with the evangelist.

Eventually, she worked with a member of the popular music group, Joyous Celebration – William Sejake. She is also widely known for being the voice behind the theme song for Khumbulekhaya. The show was aired on SABC1.

Like several other artists who are in the limelight, Lebo’s hard work, passion, and talent were helpful in bringing her this far. She is known in the country for dropping albums that house several other hits.

The year 2013 saw her drop her debut album Ithemba Lami. The second album on our list, Restored, made waves in the industry and is among her most significant success so far. The album housed popular tracks and ever since other albums followed.

The Majority of Gospel music lovers in the country no doubt are familiar with her songs. She has dropped several hit songs that circulated the country so fast after their release.

Her album By His Grace housed the track Melsui that gained massive airplay on television and radio. Another of her song that received positive feedback and made waves is Umusa.

Another album that contained a hit track is Restored, Lion of Judah made waves from the album. On streaming sites it earned massive views also, on YouTube, it has over 7.5 million views. The song was uploaded on YouTube on 4 October 2016 by Zenzile Molo.

She has taken home several awards and gained recognition from notable award sponsors. Lebo received her first album in 2012, she smiled home with the Gospel Legacy Award by the Vaal Triangle.

In 2016 another award followed at the SABC Crown Gospel Music Awards. She took home under the category of the Best Female Artist.

She has also been nominated for other big awards. In 2019 at the South African Music Awards (SAMA), Lebo was nominated for the Best Contemporary Faith Music Album.

She was also nominated for the Best Traditional Faith Music Album. Her album Umusa earned her the nomination. She also appeared on the nominated list of the Female Artist of the Year.

Hard work begets success, success begets more opportunities, that is the case of this renowned artist. She has worked with labels including Tox Music, Revolver Music, LLL Productions, and Sekhorane Entertainment.

A few years ago, she took the courage to share how she fell victim to rape as a young girl. She made this touching reveal in an interview with True Love.

According to her, it left her with a very unpleasant and prolonged experience and she was yet to get over it. She further shared how she fell victim to the act twice.

The first rape incident occurred when she was eight by a friend of her elder sister. The second was by a neighbor who preyed on her in his car after he offered her a lift.