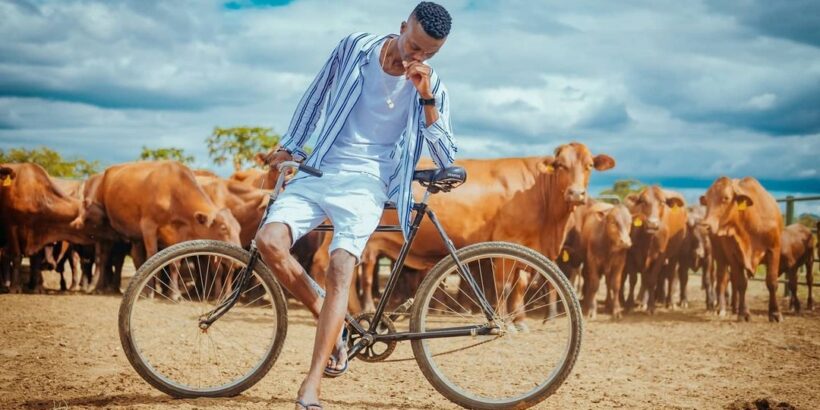 King Monada (born Khutso Steven Kgatle; 25 November 1992 in Limpopo) is a popular personality in the South African music industry. He has been able to enter and remain relevant to the industry despite the competition for his creative composition skills.

Khutso also owns a label King Monada Music and his uniqueness in the industry has earned him the titled “King of Bolobedu music.”

The fast-rising artist has his Bolobedu singles making waves on the international and African music charts. He has also collaborated with several other big names in South African music.

He is also an award-winning artist, yes! he has taken home several awards and recognitions for his amazing style of music.

His date of birth is on 25 November 1992 and the place of birth is in Mokgolobotho village, Tzaneen, Limpopo. King Monada is 28 years old.

He was born into a family of five children making him a brother to four siblings. King Monada’s parents are Elvis Kgatla (father) and Thandi Matlala (mother).

He is a middle child, he has two older siblings, Lucky and Michael, and two younger siblings.

With his fast rise to fame, many of his fans and lovers of his music wonder if he is married. The man is married and in a relationship. The Bolobedu singer has two women in his life, he is married to Lerato Ramawela and Cynthia Nthebatse Leon.

On September 23, 2020, an entertainment news site reported that “King Monada Leaves Second Wife“. The source has it that the Idibala star was allegedly through with Cynthia Leon.

The singer chased his second wife out of his house in Limpopo, sources covered that Cynthia had always nagged him for returning home late.

The singer has three (3) children, Kgothatso Junior (son) and Temoso (daughter). The proud daddy took to social media to make followers know of the new member of his family. On January 24, 2020, King Monada shared a picture of his newborn child with Cynthia, her mother.

He started his academic pursuit at a young age at a Sebone Primary School. After which, he proceeded with his studies at Magoza High School.

During his teenage days, he had a passion for music and was already manifesting. The singer dropped out of the institution while he was in his 8th grade.

The Tzaneen-born songwriter owns the label, King Monada Music. He also owns a mansion in Limpopo and says that he built the house because the entertainment industry can be very unpredictable.

I decided to build this house because an artist’s lifespan is never guaranteed, so I needed to make sure that if anything happens to me or my career, my two wives and children would not suffer. Having all the fancy cars is great, it is beautiful. But that’s just it. You cannot invest in a car, but a house is surely an investment, this house is big enough and does not need any extensions even in future.

Upon quitting his academic pursuit he took his music profession more seriously and started to compose music. In 2005, when he was around 13 years old, he did dancing and music.

The song he does is based on Khelobedu language and today, his genre is Amapiano and Afro-pop. He did not experience a smooth journey in music because he was based in the rural part of Limpopo at that time.

His breakthrough in music came following his performance in taverns and parties. Eventually, he connected with Molao Rammala, Open Mic Productions producer.

King Monada dropped his first song Ska Bhora Moreki which made waves in South Africa. It made received positive feedback from music lovers in the country.

According to him, party people who enjoy having their drink in peace while they have a good time gave inspired him to work on the song.

Being unique and talented pays off and for the Limpopo-born artist, it is. Upon releasing his Bolobedu house music songs many have been a hit both in South Africa and abroad. His work has gained him recognition.

He took home three awards at the Limpopo Music Awards including “Best Khelobedu single“, “Song of the year“, and “Best duo/Group collaboration“.