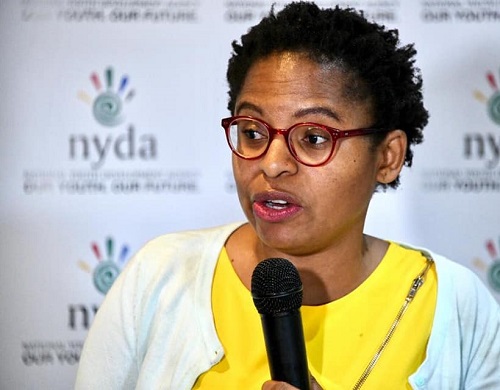 Khumbudzo Ntshavheni (born 30 January 1977) is a South African politician. She holds the position of Minister of Small Business Development and is also a member of the National Assembly.

She belongs to the political party African National Congress. She was appointed to serve as Acting Minister in The Presidency: Planning, Monitoring, and Evaluation by the incumbent president of South Africa Cyril Ramaphosa. Khumbudzo was appointed to serve under the position on 27 January 2021 until further notice.

Her place of birth is in Sibasa, a town in the Transvaal province of South Africa. Khumbudzo’s mother was a worker in the taxi industry and her dad was a general dealer’s store owner.

She had her matriculation at Mbilwi Secondary School and studied at the Rand Afrikaans University (RAU) obtaining an undergraduate degree in Political Science. Khumbudzo holds a BA Hons in Development Studies from the University of Johannesburg former RAU.

She also obtained a BA Hons in Labour Relations from the same higher institution. In 2008, Khumbudzo obtained an MBA degree from Bradford University, U.K.

Her experience covers the fields of Strategic Management, Information Technology, Change Management, and Communication and Marketing. Khumbudzo is also the Chairperson and founding Director of Nkho Trading.

For two years, (2008-2010), she served as the Municipal Manager of the Ba-Phalaborwa Local Municipality, Limpopo. Before the position, she was the Tourism Manager at Trade and Investment Limpopo.

She also served as the Chief Information Officer, the Limpopo Provincial Department of Local Government and Housing. She was also the Spokesperson to the Premier of Limpopo. Khumbudzo also lectured at the University of South Africa (UNISA).

Khumbudzo was also the Chief Operating Officer at the State Information Technology Agency (SITA). In July 2015, Public Enterprises Minister Lynne Brown appointed her to the Board of Denel and served as a non-executive director.

She is a member of the ANCYL’s NEC and actively takes part in several structures that relate to youth interests and the community.

In 2013, she was among the twenty-two persons that were appointed to an ANC National Task Team. After she was elected to the National Assembly, she was appointed by Cyril Ramaphosa to serve as Minister of Small Business Development.