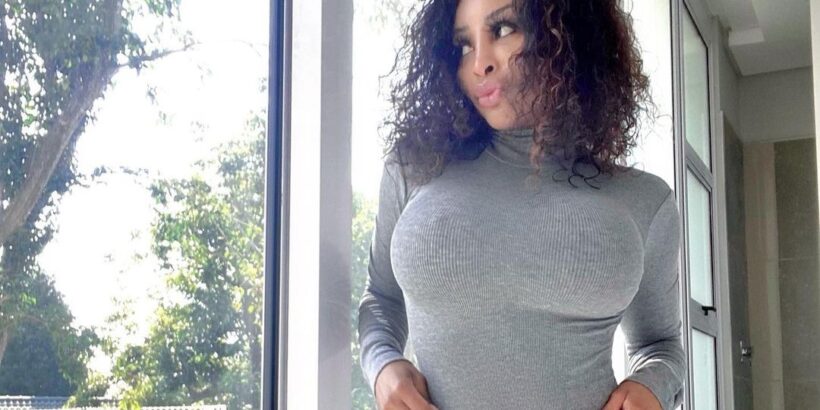 Khanyi Mbau (born 15 October 1985 in Johannesburg) is a South African award-winning actress. She is also a businessperson, television host, and artist. The beautiful actress has an older half-sibling Lasizwe Dambuza who is also in the entertainment industry.

The actress has appeared in several television shows in South Africa and has been recognized for her unique style of acting. There are many actors/actresses on the screen but only a few receive an award, she is among the few.

Her date of birth is on 15 October 1985 and the place of birth is in Florence Nightingale Hospital, Johannesburg, South Africa. Khanyi Mbau is 35 years old.

She was born into the family of Lynette Sisi Mbau, who gave birth to Khanyi while she was not yet married. Her father, Menzi Mcunu, has no claim over her but had the chance of naming her. He provided her first name Khanyisile which could translate to “the bringer of light”.

The nature of work force her mother, Lynette to leave her under the care of her grandmother. She learned to appreciate art from her grandfather Mr. Babes Mbau. She attended an all-white school during her stay with her grandmother.

The beautiful and talented actress met and got in a relationship with Mandla Mthembu, a millionaire and former journalist in 2005. In the next year, the couple got married, nine months into their wedding they had their divorce.

Mthembu allegedly claims that Khanyi is only after his money, the love they shared in their union made her a mother. Reports also covered that Khanyi Mbau dated Tebogo Lerole for a decade (10 years) before they called their relationship a quit in 2020.

She is also active on social media and Khanyi Mbau Instagram page, @mbaureloaded, she boasts of over 2.6 million followers. She updates followers, fans, and interested users on her lifestyle, travels, and fashion sense.

She shares snaps of her “outgoing, ambitious, and flashy” way of life. Khanyi has made a name for herself in the South African entertainment industry and beyond.

In 2004, Mbau landed the role of Doobsie on Muvhango. She took on the role to replace Lindiwe Chibi after Dan Mokoena, her boyfriend shot her.

One year later, she left the show after she was fired from the role. Reports covered that she spent too much time partying and appearing in the Sunday tabloids.

In 2006, she landed another role as an actress after she was cast in Mzansi. She joined the popular SABC1 drama series playing the role of Mbali in season two of the show.

Later in the year that followed, she landed another role in After 9. On the SABC1 mini-series, Mbau was cast as Zee. In 2012, Khanyi appeared on season 2 of the SABC1 show Turn It Out as the Guest Judge.

In 2012, she landed a starring role in Ekasi: Our Stories. She appeared in one episode of the E.tv’s anthology drama series. She also appeared on I Am, a DStv Vuzu documentary.

The Johannesburg-born actress was cast on the series Like Father Like Son. On the Mzansi Magic mini-series, she played the role of Sindisiwe Sibeko.

In August 2012, she dropped Bitch, Please! I’m Khanyo Mbau. The biography on her was written by Lesley Mofokeng. In the next year, she was featured in the docu-reality TV series on E.tv titled Reality Check.

Still, in 2013, she became a host on her talk show Katch It With Khanyi on eKasi. In the year that followed, 2014, she competed in season seven of Strictly Come Dancing.

Mbau and Quintus Jansen, her partner, were eliminated in the seventh week after they couldn’t earn enough votes to remain in the competition.

In April 2015, she was cast on the E.tv’s telenovela Ashes to Ashes playing the supporting role of Pinky. In November the same year, she received a nomination for “Best Instagram Account” in the Channel24 Online Awards.

In 2016, she appeared in the popular television drama series Umlilo and was portrayed as Palesa Simelane. In July 2016, she landed a new TV show The Weekend Edition on SABC3. She hosted the show alongside Phat Joe, a radio and television host.

In July 2017, she made an appearance in the entertainment show on SABC3 The Scoop. In March 2018, she landed an acting role on Uzalo, a popular series on SABC1.

On the show, she played the role of Dinekile (a.k.a Lady Die). In April 2018, she landed a lead role in the drama series Abomoma.

The actress is not only a television personality but a radio figure as well. In 2016, she was a host on the show Whose show is it anyway on Metro FM.

Her first featured film is Happiness is a Four-letter Word. In the movie, she was cast as Zaza, who is wife to Bheki and a mother of two children. The character also owns a shoe store. The film premiered on 19 February 2016.

In October 2016, her acting talent was recognized, she was named on the “Top ten South African actresses in Film” by Johannesburg Film Festival. In November 2018, she announced to launch I Am Khanyi – Millennial Shimmer Gin, her brand of gin.