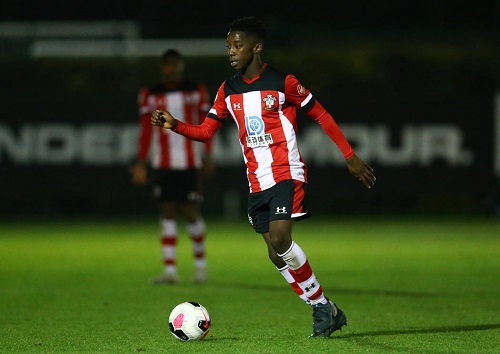 Kgaogelo Chauke (born 8 January 2003) is a South African footballer. He signed his debut professional contract with Premier League side Southampton in 2020.

Kgagelo resides in the United Kingdom since his young days. He has made progress through the academy at Saints.

His date of birth is on the 8th of January 2003, he was born to South African parents. Kgaogelo Chauke is 18 years old. He celebrates his birthday every year on January 8th.

He signed his professional contract with Southampton, a Premier League club. The promising mid-fielder signed a two and half year contract with the English side.

He signed the deal that is expected to end in June 2022.

He made ‘rapid strides’ in the club’s academy after moving from Under 17 to Under 23 level before he appeared in the EFL Trophy competition.

“Kegs has shown tremendous progress since joining us partway through his Under-15 season,” Hale said.

“He has learnt so much and showed a real curiosity to develop. He has strong listening skills, an acceptance to take on information and applies his learning really well in games.”

“The coaches enjoy working with him and I’m looking forward to watching him develop further over the new few years.”