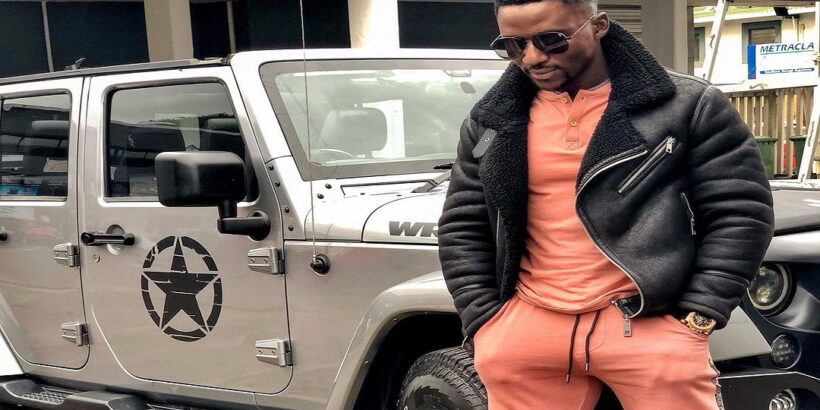 Joe Kazadi (born in Congo) is a popular actor, model, dancer, and chef in South Africa. He is known to many television viewers in the country for being a macho guy. The actor also is proud of his body and flaunts his six-packs abs on social media.

His well-toned body has made him many female crushes and some even address him as “one of the sexiest men in South Africa”.

Joe’s place of birth is in Congo and there he spent his early childhood days. At the age of ten, he and his mother Esther Mbuyi relocated to South Africa from the Democratic Republic of Congo (DRC). A lot of discrimination followed his newfound life in Durban.

While working as a waiter, a customer opened his eyes to what has made him who he is today. The customer told him to consider either to be a model or actor since he possesses the “good look”.

He was quick to buy the idea and tried it out and went ahead to a modeling agency to sign up. After spending some months in the agency, he scored a modeling gig.

Modeling brought the young man more income and then he had to relocate to Johannesburg. He left his former place of residence in 2009 to expand his new profession. This came after he lost his job as a chef.

Though at that time, the Congo-born had to borrow his transport fare from a friend. On the bus to Johannesburg, he encountered a little problem, the R120, he borrowed was not enough.

Upon pleading with the driver, he allowed Joe to sit where the luggage was in the trailer. The driver checked up on him at each bus stop noticing that he was uncomfortable, but he arrived safely in the city.

Finding a place to lay his head was another challenge, and so he decided to sleep in an abandoned building. He remained there for a couple of nights and there he had companies, rats.

Joe did not finish his academic pursuit after he had an early dropout. He left school to assist his mother who was not working and luckily he was employed as a waiter in a restaurant.

Joe who was still young wanted more and then he enrolled in a culinary arts course. He was able to pay for his fees with his earnings from his waiter gig.

In 2011, he moved to Johannesburg after he was introduced to Ice Model Management. More challenges came as he was homeless and walked a long distance for interviews and castings.

He slept on the street and had no idea of what his next meal would be, this challenges became his sources of motivation to put in more effort. They say “what doesn’t kill you makes you stronger”, that was his case perhaps.

Today, Joe has a home in Johannesburg and there he lives with his girlfriend. Though Joe or his girlfriend (who prefers not to be named) rather say nothing about her identity on social media.

He is a father to a daughter called Omotola Zizipho Kazadi. He shares pictures of him and his daughter on social media.

Before choosing to act, he was “a very good” footballer in Durban. In his words, he was a top scorer for the Stella Football Club. He thinks that his background in soccer played a huge role in helping him play the role of Thabiso.

The actor has gain popularity for being an actor and has built his career in the industry over the years. He has made a name for himself in the industry which earned him the chance to represent Africa in Hollywood.

His body stature has given him an edge over other actors in landing several roles. On one of the most viewed series in the country, Uzalo, he was cast as the businessman Mr. Phillipe.

Joe was cast in another popular South African soap opera, The Queen. On the show, he played the role that makes many dislike the character. The character raped his girlfriend who refused to get married to him.

Do not mistake Joe for the jerk he played on the screen. He is a Christian and a family man who has high respect for the opposite gender, women.

He has since his journey in the industry appeared in several other movies including;

According to Net Worth Post, the popular actor has an estimated net worth of around USD 6 million (R88 million). Making him a multi-millionaire.

The actor who had to borrow money to relocate to Johannesburg has grown to be a big name in the South African entertainment industry.