Skip to content
Jacob Zuma served as president of South Africa from 2009 until his resignation in 2018. 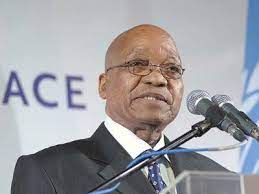 Jacob Zuma was born on April 12, 1942, in Nkandla, South Africa. He joined the African National Congress (ANC) in 1959 and advanced through the party’s ranks and became its president in 2007, two years before he was elected president of South Africa he serve time in prison for his connection with a violent wing.

Zuma is a divisive politician who has been embroiled in a number of judicial cases including corruption and racketeering. He has 20 offspring and is a polygamist as well. In response to ANC’s efforts to remove him from office, Zuma announced his resignation as president in February 2018.

Jacob Gedleyihlekisa Zuma is a divisive character in South African politics. He was born on April 12, 1942, in Nkandla, a region of South Africa that is today known as KwaZulu Natal (formerly Zululand). His father was a police officer and he passed away when he was 4 years old. To support his mother, who worked as a housekeeper, he took on odd jobs to earn money. He taught himself to read and write because he didn’t have time for school.

Zuma joined the ANC, a political group that opposed the nation’s practice of apartheid—or racial segregation—and other discriminatory practices in the late 1950s, after being persuaded by a trade unionist family member. Zuma was forced to conceal his membership at this time since the ANC and other opposition organizations had been outlawed by the government.

The ANC, which had previously been peaceful, created a militant wing in the early 1960s after being forced into hiding. The new militant organization, Umkhonto we Sizwe, committed acts of sabotage against the government. Zuma joined the gang in 1962, was detained with 45 other members the following year, and was quickly found guilty of conspiracy. He was given a 10-year prison sentence and served it in the notorious Robben Island jail, where Nelson Mandela, the nation’s future president, had also spent a significant amount of time.

After being freed from prison in 1973, Zuma continued to work for the ANC and was instrumental in setting up the KwaZulu Natal branch’s infrastructure. He went into exile two years later and lived in numerous different African countries. In 1977, Zuma remained committed to the ANC and became a member of its National Executive Committee. Over the following ten years, he held several ANC positions and developed a reputation for being dependable and diligent.

Zuma returned to South Africa in 1990 after the ANC’s ban was lifted. He assisted the party in negotiating the release of political prisoners and the repatriation of exiles with the F. W. de Klerk-led administration at the time. Zuma also attempted to stop the violence in his native KwaZulu Natal. Zuma is credited for bringing about long-lasting peace in the area, and in 1994 he joined the province’s Executive Committee of Economic Affairs and Tourism while failing in his bid to become the province’s premier. He became the national chairman of the ANC and the party’s chairperson for KwaZulu Natal inside his own political party.

Thabo Mbeki appointed Zuma executive deputy president of South Africa in 1999 when Mbeki was elected president, continuing his political ascension. Mbeki established a special force known colloquially as “the Scorpions” to look into corruption as part of his plans for the nation. Later that year, the South African government declared it had signed an agreement to purchase aircraft, ships, helicopters, and submarines valued at 29 million rands. Zuma has been plagued by this deal for years. When financial issues were found, he and other officials were under investigation. Zuma was initially exonerated in a 2001 investigation on the subject, but afterwards found himself the target of corruption allegations, which were eventually dismissed in 2003.

In 2005, after Shabir Shaik, Zuma’s financial advisor was found guilty of fraud and corruption, Zuma’s legal issues reappeared. For accepting a bribe in connection with the 1999 arms sale, Zuma was once more charged with corruption. President Mbeki fired him as a result.

Zuma was accused of raping a lady in his home in December 2005. At the beginning of 2006, Zuma was on trial in Johannesburg for several months before pleading not guilty. Zuma received criticism for his lack of knowledge of HIV/AIDS transmission during the trial. Zuma said that they had sex without any protection and that he showered right away to avoid contracting the HIV virus from his accuser, who was HIV positive. For a nation that has been dealing with an AIDS pandemic, this was major news. Zuma was cleared of the charge in May following the judge’s determination that the sex was consensual.
The corruption accusations against Zuma were dismissed by a judge in the fall of 2006. But there was still room for accusations to be brought against him later. Without any legal issues, Zuma swiftly entered the race for the ANC presidency. He challenged erstwhile pal and president Mbeki for leadership of their political organization. Though others considered him as distant and distanced from the people, Mbeki was seen as a moderate leader who had steadily grown the nation’s economy, one of the strongest in Africa.

Jacob Zuma, in contrast to Thabo Mbeki, positioned himself as a man of the people, and many South Africans found him appealing due to his success in overcoming early obstacles. He also used the song “Bring Me My Machine Gun” as his anthem to use his prior experience as a guerilla fighter to establish himself as a man of action.

In December 2007, when Zuma defeated Mbeki, it was thought that South Africa was about to undergo change. According to a Pretoria News article, he was expected to depart from Mbeki’s centrist positions and was strongly backed by the unions and some communist party officials. This raised some doubts about the nation’s economic prospects.

Kgalema Motlanthe, who later became Zuma’s deputy president, lost the 2009 election to Zuma for the position of president of South Africa. Despite growing criticism that his administration had failed to strengthen the country’s economy or successfully combat corruption, he was reelected in 2014.

On February 14, 2018, Jacob Zuma announced he was stepping down as president of South Africa. The announcement came after ANC called for a no-confidence vote on the president and publicly demanded his resignation.

The ANC had been trying to oust Zuma for months. In December 2017, the party elected former union leader Cyril Ramaphosa to be its new president, though Zuma subsequently rejected the urging of ANC members to quietly step aside.