Funke Akindele born (24 August 1977) popularly known or Jenifa is a Nigerian film actress and producer who rose to fame for her role in the movie titled Jenifa which earned her the nickname Jenifa. 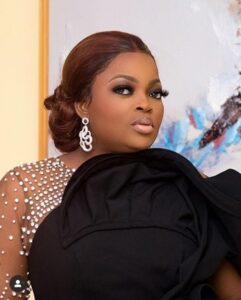 She was born on the 24th of August 1977, in Ikorodu, Lagos State, Nigeria. She is the second of three children. Her mother is a medical doctor while her father is a retired school principal.

Funke Akindele got married to Adeola Kehinde Oloyede on May 26, 2012. In July 2013, the couple filed for divorce, citing irreconcilable differences. In May 2016, Funke Akindele married Nigerian rapper JJC Skillz in London. In December 2018, she gave birth to twin boys, and she also has several stepchildren.

Funke Akindele shot to fame after appearing in the well-liked sitcom I Need to Know, which was sponsored by the United Nations Population Fund (UNFPA) and aired from 1998 to 2002.

She portrayed Bisi, a bright and curious secondary school student. When she starred in the film Jenifa in 2008, she received her big break.

Her first film as a director was the 2019 political drama Your Excellency.

She has an estimated net worth of $7.6 million which she has earned as an actress.