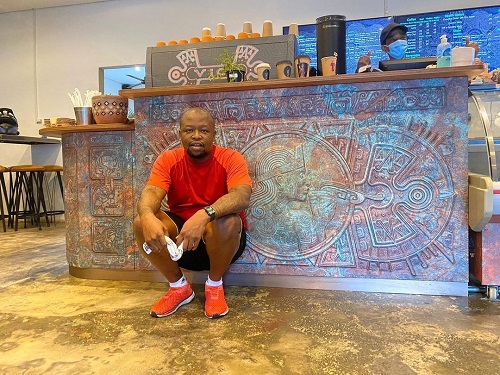 DJ Naves (born Lebogang Naves; 27 July 1984 in Soweto) is a South African club and radio Deejay. He is popular for working with Metro FM, starting from his collaboration with T’Bo Touch on his Rhyme and Reason hip hop.

Naves was born on 27 July 1984 in Soweto, South Africa. During his days in high school, he discovered his love for Hip-Hop and went to study Sound Engineering. DJ Naves is 36 years old.

The Gagasi FM DJ Lebogang Naves is married to sweetheart Noluthando. The couple became husband and wife in a lavish traditional wedding.

The deejay had a “lavish and star-studded” traditional wedding in Johannesburg, South Africa. Friends and family were present to witness the couple has their wedding ceremony.

Among his friends who graced the occasion include Unathi, David Kau, Mel Bala, Nothemba Madumo, and DJ Shimza. Deejay Sphectacula was among his groomsmen.

He is also a popular face on 1’s and 2’s, Lebogang appears on the reality competition series as a judge.

The popular Disk Jokey has landed cameo appearances on popular TV series. He played the role of a Deejay on season two of isiBaya, an Mzansi Magic soap opera.

Sphectacula and DJ Naves are among the most popular DJ duos in South Africa. They are the host on “Ore-Party on Metro FM and they also collaborated in releasing their debut album “Kings of the Weekend”. The album received a nomination for 5 Metro FM awards.

Lebogang caused total havoc after posting a photo of himself wearing what seems like a typical doctor’s attire. He completed it with a stethoscope around his neck.

This triggered mixed reactions from his fans and followers, many congratulated him while others are skeptical that he was rocking a Halloween costume.

Maybe Naves will get back to Mzansi’s social media followers on this one and perhaps set the record straight.