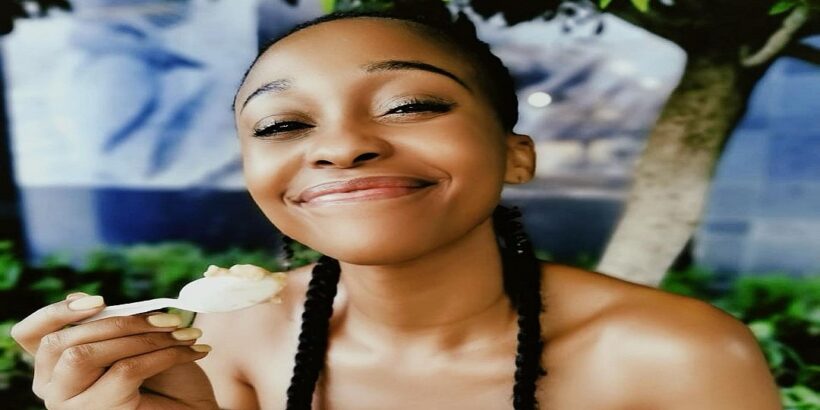 Didintle Khunou (born 14 November 1992 in Klerksdorp) is a South African theatre, film, and TV actress. Her talents extend to singing, presenting, and MCing.

Television viewers couldn’t help but fall in love with her act on the screen. Many know her for her role in The Color Purple Musical at the Joburg Theatre.

She portrayed the role of Celine (starring) in the Janice Honeyman production. The effort she puts into the industry has been recognized and has earned her an award.

Her date of birth is on 14 November 1992 and the place of birth is in Klerksdorp, North West Province, South Africa.

Didintle Khunou is 28 years old. Born into a family of four, she is the second to the last (third) child of her parents.

She found her new love for performing during her days in school. As a teenager, Didintle discovered that she is passionate about performing. This followed after she appeared in a school production at the age of 16.

She had her higher school education at the University of Witwatersrand.

After completing her supposedly academic year, she graduated from the university with a BA Honours in Dramatic Arts.

To broaden her knowledge, Didintle further received acting lessons at ActorWize. She underwent the professional acting course for film and television by Rajesh Gopie.

She was born into a family of notable personalities. Her father is a general practitioner while her mother is a medical technologist turned businessperson.

In an interview session, she told SowetanLive that she is not a Christian. But she prays in nature and that is where she finds refuge – in nature.

In 2016, Didintle appeared first on TV after she landed the role of Modiehi (recurring role) in Mamello.

She made her debut appearance on the SABC2 drama series on August 31.

She returned to continue with the role on the third season of the series in the following year, 2017.

Next, in 2018, Didintle was cast in a guest-starring role of Single Galz, Season 2. She appeared in the twelfth episode of the SABC1 sitcom on April 23.

Still, in 2018, she was cast as Mapula in The Throne, an Mzansi Magic telenovela. She made her debut appearance in a recurring role on November 12.

With her exceptional acting talent came more opportunities. She and Stella Dlangalala appeared as guests in episode 11, season 2 of #Karektas in 2020. They appeared on the SABC2 variety comedy series on April 24.

Later in the same year, she landed another starring role in Isono: The Sin. On BET Africa’s first original telenovela, she was cast as Esther Ndlovu.

She won the Naledi award and the Broadway World Online Award for ‘Best Lead Actress In a Musical – Female’ for her performance as Celie.

The award-winning actress has continued to make a name for herself and climb to greater heights.

She started her profession at a young age and never slacked, Didintle remains relevant in the entertainment industry.

An entertainment news site Savannah News reported that Didintle Khunou has an estimated net worth of around USD 150,000.

Her source of income is her acting profession, voice-overs, among others.

Didintle uses her social media platform to share pictures and video stories of her progress in the industry and her personal life.