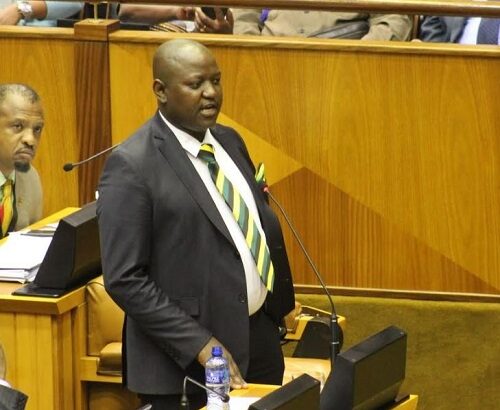 Jacob Boy Mamabolo (born 11 May in 1983 in Seshego Township) is a South African politician. He serves as a Member of the National Assembly of South Africa.

At the 2019 general elections, Jacob was elected into the Parliament. He belongs to the African National Congress (ANC), a political party in South Africa.

His date of birth is on the 11th of May 1983 and the place of birth is in Seshego Township near the City of Polokwane in the Limpopo Province. Jacob Boy Mamabolo is 37 years old. He celebrates his birthday every year on May 11th.

In 1998, he started his academic pursuit at Mponegele Primary and completed at Letlotlo Primary School in 1995.

The following year, in 1996, he joined COSAS as an active member, the same year he was in Grade 8.

In 1997, Jacob was appointed to serve in its Branch Interim leadership.

He was elected to serve as the Branch Secretary and occupied the position until 2000.

He climbed to the position of the COSaS Capricorn Regional Secretary and served for two (2) years (2000- 2002).

In 2002, he was elected to serve as the Provincial Secretary at the Limpopo 6th Provincial Conference while doing Matric.

During his days in high school, Jacob served as the Sport, Arts and Culture Head and Secretary of the LRC.

He took on the position in 1999 and got re-elected up until 2002. Jacob is a 2nd-year Paralegal Student at the University of Johannesburg.

He will be completing the course in November 2020, he wants to continue his studies until he obtains a Doctorate.

He officially became a member of ANCYL in 1997 after he became actively involved when he was 12 years old when he served in the ANC’s street Committees.

During his years at Rand Afrikaans University (now UJ), he served as the Branch Secretary of SASCO for a year (2003-2004).

After which he occupied the position of the ANCYL RAU Campus Secretary in 2004.

He quit RAU because of the pressure that followed and then returned to Polokwane.

He started involving in Committees/Boards including The Limpopo Geographical Names Committee. He was a member of the committee for four (4) years (2006-2010).

Jacob was appointed to the position of Provincial Chairperson by the then MEC for Arts and Culture Cde Joyce Mashamba.

He served as the Chairperson of the Committee until 2013. Jacob served in the Limpopo Tourism Board in 2008.

He served as the ANCYL Branch Secretary of Milo Malatjie Branch at Ward 13 in Polokwane Sub-Region (2008-2013).

Jacob had to relinquish the position to occupy the Chairperson of the ANC Branch (2013 to Present).

Before climbing to the position, he has been a BEC member of the ANC since 2002.

In 2013, he took part in the ANC Parliamentary list processes to the Legislature.

Sadly, he was asked to withdraw following the “criminal charges” he faced. So he had to clear his name in Court.

In 2018, he returned to take part in list processes and he topped the list as number one during the nomination processes for Province to National.