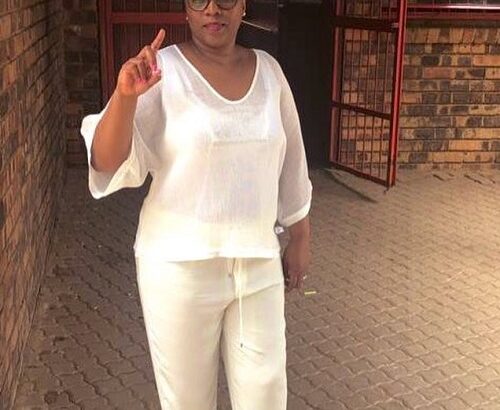 Ayanda Dlodlo (born 22 May 1963 in Soweto) is a South African politician, member of the ANC, and a cabinet minister. She serves as the Minister of State and Security in president Cyril Ramaphosa’s cabinet.

She occupies the ministerial portfolio since May 30, 2019. Ayanda served as the Minister of Public Service and Administration for a year (February 2018 – May 2019).

She was born in Soweto, Johannesburg, South Africa. Ayanda’s dad was studying for a Bachelor of Science in a higher institution. Later, he became a principal in a school with a degree in education.

Her mother was a student nurse, together with her family she escaped to Swaziland during the apartheid era. Her parents’ marriage did not last after her they called their marriage a quit her mother returned to the country and stayed in Johannesburg.

At the age of seventeen, she joined African National Congress’s Military Organization Umkhonto weSizwe. She went to Angola in 1980 to undergo military training.

She holds several postgraduate qualifications in Management Development; Business Management and Executive Development Programmes. During her days in exile, she had basic military training in Angola and also underwent military intelligence training in the USSR. After which she moved to the UK to study Marine and Shipping Management.

She later studied Management Development, Business Management, and Executive Development Programmes. In 1994, she came back to find her sister dead by the security forces and her mother suffered from the effects of detention and torture.

After she came back to the country, she landed a job at Portnet. Ayanda has worked at South Africa National Ports Authority, and South Africa Freight Rail Company.

She has also worked on special assignments for the New York and New Jersey Port Authority and as the Associated British Ports. Ayanda has directed several companies like Rosschef Africa, The Wired Cloud, and Women in Energy.

Ayanda Dlodlo was married to Theophilus Dlodlo. She describes her husband as a person that loves this country very much. They met in 1983 after Theophilus had been detained by the Swazi authorities and herself.

They fell in love at that time but afterward, the Swaziland authorities deported them and so they moved to Lusaka, Zambia.

In 1986, her husband requested permission to come to Swaziland for them to get married. They got married in a “very secret quiet marriage”. He died on May 1987. Ayanda is a proud mother of Thabang Mnisi.

She headed the Department of Safety and Security, Gauteng Province, South Africa. She also was the head of the Strategic Operations at the elite crime unit, Directorate of Special Operations (Scorpions), which is now defunct.

In 2007, she served as the general secretary of the uMkhonto weSizwe Military Veterans’ Association. She also was the supporter of Jacob Zuma for party president at the Polokwane conference.

The same year, in 2010, Ayanda became Zuma’s parliamentary counselor. In November 2010, she served as the Deputy Minister of Public Service and Administration in the First Cabinet of Jacob Zuma.

In 2012, Ayanda was barred from doing business with the federal, state, and local government for five years for her roles as a fellow director of VIP Consulting Engineers.

In 2014, Zuma re-appointed her to the same ministerial position and she served under the position for three years. For seven months, she served as the Minister of Communications (March-October 2017).

Since 30 May 2019, she serves as the Minister of State Security after being appointed to the position by President Cyril Ramaphosa.

She is a member of the NEC of her party ANC and occupies the position of the chairperson of the Legislature and Governance subcommittee. She represents South Africa on Open Government Partnership.