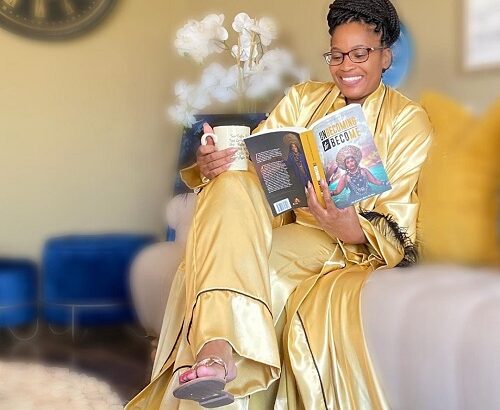 She replaced other actors including Zinzile Zungu and Phumele Zungu on Isibaya, an Mzansi Magic telenovela.

Her date of birth is on the 13th of January 1981 and the place of birth is Ntuzuma near Durban in KwaZulu-Natal, South Africa.

Ayanda Borotho is 40 years old. She celebrates her birthday every year on January 13th.

She had her high school at Brettonwood High School, Umbilo, Durban. In the institution, she underwent training in Speech and Drama.

She received a Diploma in Integrated Marketing Communications at the AAA School of Advertising (1999-2001).

She specialized in strategic brand management.

Ayanda Borotho is married to Filike, an accomplished doctor. The couple met in 2012 when she was on set. The following year, they became husband and wife.

The couple’s marriage has been blessed with three (3) children.

Aside from her acting and modeling career, she is also an author of a book. Lately, she dropped her first book ‘Unbecoming To Become’.

In the book, she tries to look at issues with relates to people’s perceptions, norms in society, and cultural factors. As a result, defines “self-value” for girls and women.

She further shares her experience as a young girl, how she got pregnant.

In 1999, she kicked off her career in acting following her portrayal of babysitting schoolgirl Thami in Generations, an SABC1 soapie.

The following year, in 2000, she landed a minor role in Mr. Bones, a Leon Schuster film.

Seven years later, she landed the title role in Nomzamo, an SABC1 sitcom, from the second season.

In 2009, she also landed a minor role of Busi in season four (4) of Home Affairs, an SABC1 drama series.

Ayanda landed a role of Phumelele on isiBaya, an Mzansi Magic telenovela in 2013.

In 2018, Ayanda was cast as Khethiwe in Ambitions, a Mzansi television drama series.

Aside from her acting career, she is also a presenter. Ayanda was offered to host Mzansi Revival Hour, an SABC1 Gospel Music Show, in 2014.