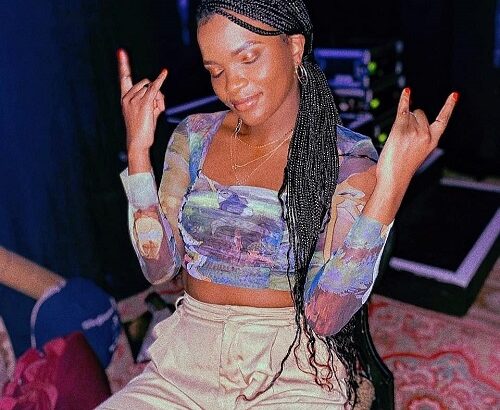 Ami Faku (born Amanda Faku; 28 May 1993 in Port Elizabeth) is a South African musician, performer, and songwriter. The fast-rising star is making waves in the South African music scene with her Afro-soul music. With her voice and style of music, the singer can beat competitions and make a name for herself in the Mzansi music scene.

Many music lovers would agree that her Afro-soul music has made them fall in love with her and her music. The Port-Elisabeth singer first appeared on the screen in the music contest, The Voice South Africa (2017). Mzansi noticed her exceptional singing talent and became interested in what she does.

Her songs have made waves in the South African music scene and have made many both singers and listeners watch out for her.

Ami has dropped several hit songs including Into Ngawe and Imali. She combines both classical Afro-soul style of music with today’s pop music giving birth to a piece of modern Afro-soul music.

Her date of birth is on 28 May 1993 and the place of birth is at Ezinyoka, Port Elizabeth in South Africa. Ami Faku is 27 years old. The songbird has a Xhosa ancestry.

Ami does not only have beauty, a breathtaking voice, and a loveable personality alone. She has brains too. Ami studied at Nelson Mandela University (NMU), Port Elizabeth.

Many noticed the talented singer after she appeared among the contestants on The Voice SA in 2017. Upon leaving the music contest, Amandi then transformed her name to Ami removing the “and” in-between and preplacing the “a” with an “i”.

Although she did not leave the show as the winner, it is arguable that it was the avenue through which she could show how good she was. The Vth Season record label signed her.

Then she dropped her first single Ndikhethe Wena, the success of the song earned her a collaboration with De Mogul SA. She worked with the Afro House Deejay and Producer on the song Ungowam.

More and more doors opened to the celebrity and she even worked with Sanele Sithole better known as Sun-El Musician on Into Ingawe, her song. One of her singles, Uwrong made it to gold status on the Recording Industry of South Africa (RISA).

She owes her singing talent discovery to her church in her home town. At the age of six, young Ami was already singing and her dad who happened to be a pastor allowed her to sing in the church.

Ami sang in the church while her talent in singing continued to develop. In 2012, at the age of nineteen, she started to record her music. Her producer lived a stone throw to her house, making it easy for the young Faku.

Many do not know, lemme shock you, Ami had been denied two (2) times in the Idol South Africa pre-auditions before she was accepted in The Voice SA.

Her family was very encouraging and supported her to audition for The Voice South Africa. She did not allow being rejected in the former competition to get in the way. She ended up climbing to the top sixteen contestants in the competition.

Even after leaving the competition, Ami Faku landed a recording label deal from Vth Season. Under her label, she dropped the hit song Imali which made waves on the South African music scene.

Ever since Faku has been making waves in the South African music scene with her hit songs; Ubuhle, Love Drunk, Into Ingawe, and Ndikhethe Wena.

In March 2019, she released yet another song that makes listeners and music lovers play on repeat Ubuhle Bakho. Not only that she drops songs that wow many Mzansi listeners, but she has also worked with many notable musicians.

The fast-rising star is doing well to preserve that African music and language too. She would love to have a collaboration with other international musicians. Ami Faku is making a name for herself in the industry and not looking back.

Listeners may think that she has been in the industry for decades because of her talent and the way she presents her music. Even in the short period, Ami Faku is not disappointing, but taking African music to the world.